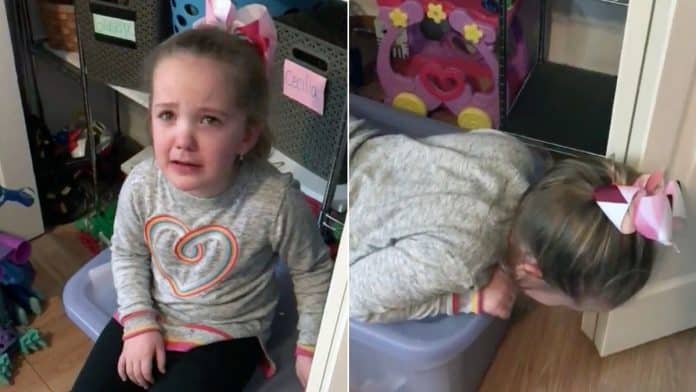 This is the moment a little girl breaks down after being told Toys ‘R’ Us is closing its stores by her mischievous older brother.

Adorable Cecilia Iffert, aged five, is overwhelmed with emotions at the devastating news her favorite toy store is shuttering and breaks down in floods of tears.

After having the heart-breaking information broken to her by her big brother Giuseppe, aged eight, Cecilia begins crying prompting mom Jessica to enter the room to find out what’s wrong.

Cecilia tells her mom it’s because she doesn’t want Toys ‘R’ Us to close and wishes it would stay forever – worried that she will no longer be able to get her favorite Barbie anymore.

Jessica tells her everything will be okay and that she’ll be able to get toys in other stores, but it’s not enough to console her daughter as she comes to grips with the giant store closing.

The hilarious clip ends with Cecilia saying ‘I love you Toys ‘R’ Us’ to the camera.

Jessica, who lives near Scranton, Pennsylvania, said: “I started filming the video when I heard Cecilia first having a breakdown after the initial news, broken to her by her big brother, Giuseppe.

“They love each other dearly but big brother does think it’s funny to pick on his little sister – as all big brothers do.

“She began begging me to tell her that it wasn’t true and I knew at that moment I should start filming.

“Cecilia was completely heartbroken to hear that Toys ‘R’ Us was closing down because she loves her Barbie’s so much.

“It’s not unusual for Cecilia to be dramatic, she’s our drama queen and future rock star if you ask her.”