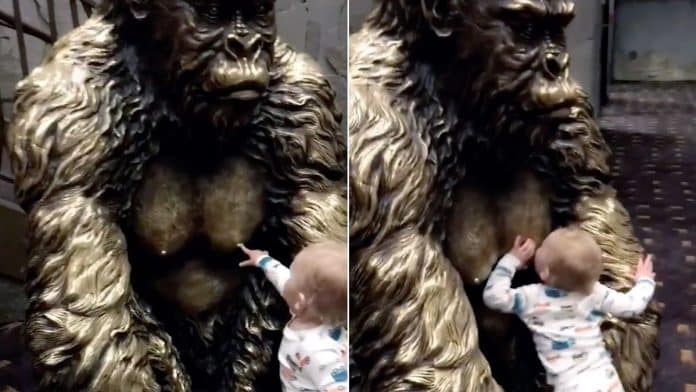 A hungry baby went ape for his next meal – hilariously trying to breastfeed from a GORILLA statue.

Tera Williams was at Kalahari Resorts in Sandusky, Ohio, walking around the hotel checking everything out with her 18-month-old son Maysn.

The themed resort featured a large gorilla statue and as the pair approached it Tera started recording as she thought Maysn might react to it in an amusing way.

But rather than back away, he immediately ran towards it pointing towards the statue’s nipples before trying to nurse from it – much to the amusement of those watching on.

Single mom Tera said: “We were walking around the hotel checking everything out and I thought the gorilla statue would surprise Maysn.

“As we approached it I began recording him but to my shock he ran right up to the gorilla.

“Maysn started playing with the nipples and proceeded to latch onto the boob – he is still nursing and clearly very attracted to boobies.”