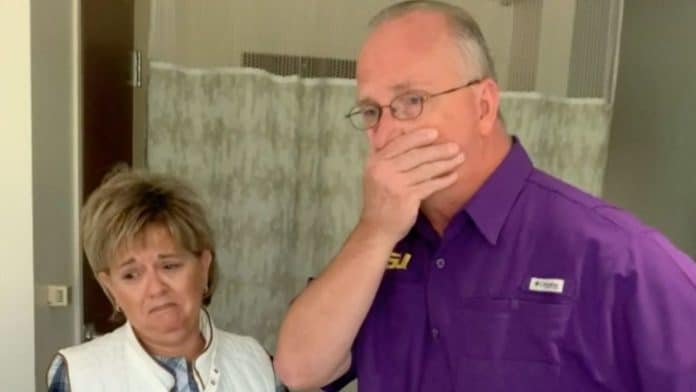 An emotional grandfather couldn’t hold back his tears when he read his newborn grandson’s name tag to discover the baby had been named after him.

Mike Sheff, 63, had no idea what was coming when he walked in to greet his daughter, Jessi Way, at Henrico Doctors Women’s Hospital in Richmond, Virginia.

Then, as he and his wife, Julie, 63, set their eyes on Jessi’s newborn baby boy, Julie suddenly noticed the name tag: Michael Sheff Way.

Not only had Jessi given her child Michael’s first name, but his middle name, Sheff, was her maiden, which had been lost when she – and her sister – had married.

Jessi, 33, wanted to keep the name alive, though, and as soon as Julie suggested Mike read the tag he immediately welled up.

According to Jessi, baby Michael arrived a few days early, and so she and her husband Barrett, 35, kept the name a secret until her parents arrived from Oxford, Ohio.

The moment took place in October 2019, but it wasn’t until recently Jessi decided to share video footage of Michael’s reaction on social media.

Jessi said: “After seeing their reaction, there was no doubt our son had the perfect name.

“The video is a memory we will cherish forever and the response the video received has been nothing short of amazing.

“I think people are craving joy, peace, and happiness, and this video fills those needs, even if only for a minute.

“It brought many people back to a moment when they experienced something similar, and we had so much fun reading through those beautiful stories that were shared with us.”