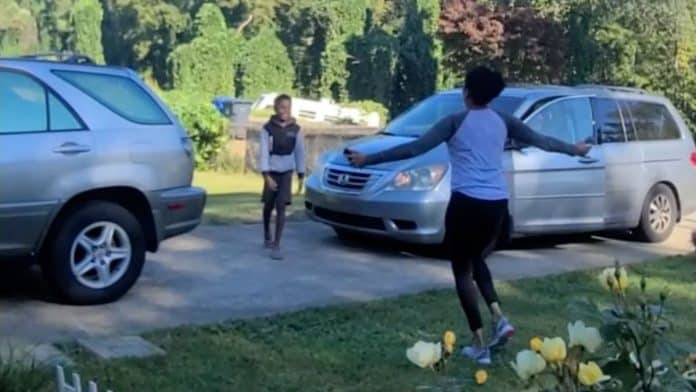 A grandmother who hadn’t seen her family for 18 months and yet to meet her new grandchild ran out of her home screaming as she realized they were on a video call on her driveway.

Rebecca Cowles, 57, from North Wilkesboro, North Carolina, hadn’t seen her daughter, Nacole, 41, and four of her grandchildren for the best part of a year and a half.

As a result, Rebecca was yet to meet Nacole’s youngest child, Mayshiana, born during the height of the coronavirus pandemic, which had caused Nacole to avoid travel while pregnant.

Nacole, who lives in West Palm, Florida, wanted to do something special to surprise her mother, and so she began liaising with her 22-year-old daughter, Tashonna.

Tashonna decided that she would give her grandmother a heads-up and head to her house on October 3, where she would sit in the corner of the room pretending to text on her phone.

In fact, she actually started to record her grandmother from afar, with Rebecca receiving a video call from Nacole, who said she was running errands.

As the pair conversed, Tashonna continued to record – only for Rebecca to then notice a car pulling into her driveway.

Everything suddenly clicked once she looked back at the phone screen and realized where the family were, so rose to her feet and headed out of the front door screaming with excitement.

She then embraced her 11-year-old grandson, Jimari, before heading to the car to hug the others and meet Mayshiana for the first time.

Tashonna, whose video of the moment went viral online, said: “It was very emotional for all of us because this was the longest we had been away from each other.

“I did not expect to get so many views and follows from a video I posted – I’ve been so grateful.

“The message I hope others take is to cherish your family, because during this hard time of being inside and isolated we can forget how important they are.”