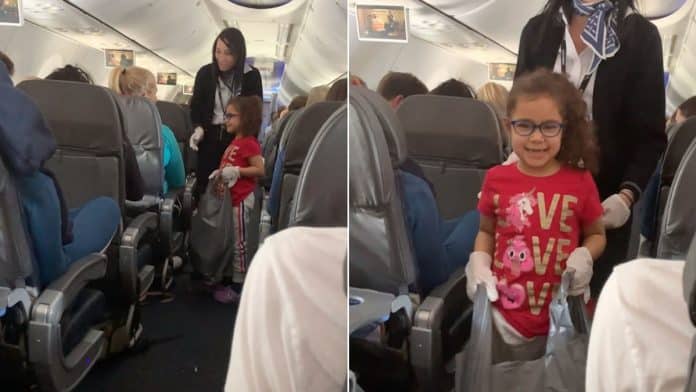 This is the moment a flight attendant helped make a girl with learning disabilities’ dream come true – by letting her become one of the crew for the day when she became distressed on a long haul flight.

Whitney Renee West, an American Airlines air stewardess, spotted Isabella screaming towards the back of the plane headed to Mexico for Spring break.

Isabella had become distressed due to tiredness after a series of connecting flights and a 4.30am start. The family had travelled from New York to Dallas and then were on their final leg of the journey to Cabo, Mexico for a Spring Break vacation.

Her mom Jessica Ruiz attempted to calm her daughter’s increasingly distressed behaviour, but with the seat belt signs on and the situation worsening, Isabella became more and more distressed, yelling at the top of her lungs.

With other passengers beginning to become uncomfortable with the noise, Jessica feared the worse with hours remaining on the international flight.

But then thanks to the kind-hearted thinking of a caring flight attendant – every thing changed.

Spotting the unfolding situation, flight attendant Whitney West quickly got chatting with the family and learned the girl would love to be an air stewardess herself one day.

She invited Isabella – who suffers from learning disabilities, to help her, going up and down the aisle serving passengers and collecting trash.

Jessica, from Brooklyn, New York, had caught a connecting flight from Texas as they made the trip to Mexico on vacation.

She said: “Traveling with children with disabilities can be a little more challenging than normal.

“Isabella often has a hard time communicating when she is angry or hurt and yells at the top of her lungs.

“During this moment Isabella was not feeling well and was increasingly upset because she had been traveling for over five hours and awake since about 4:30 am.

“We had already caught a flight from New York to Texas and was on our final leg of the journey to Cabo, Mexico.

“People in the flight were looking back at us. I’m sure they were just worried about Isabella but I’m sure that could have been a really bad situation if she cried for the entire flight.

“When Whitney Renee West saw our daughter distressed she jumped right in and asked Isabella is she would like to help her and be a flight attendant and help clean up. Isabella immediately smiled and stopped screaming and went right along with Ms. Whitney. As you can see in the video Isabella was so excited to help and be a part of the crew.”

A video filmed by Jessica shows disabled Isabella beaming with joy as she greets customers.

Jessica added: “This act of kindness did not only help Isabella but it helped our family as well because it was a high tension situation, we were stuck in a small space and were very overwhelmed, with no real obvious solution.

“We are so grateful for what Whitney did because there are so many times people do not understand children and in this moment she made sure that Isabella felt special and helped her do something that made her proud of herself.

“It was such a beautiful experience and you never know maybe one day Isabella will become part of the American Airlines family.”

Whitney added: “I saw a disabled child in distress, I saw a child who may have had difficulties sitting still or just being there in a confined space for such a long time.

“I saw the mom trying to calm her down, but not having much success.

“So I chose to ask my fellow colleagues if they would be willing to let her become an attendant for the day.

“She was amazing at it and I’m so glad I could help.”