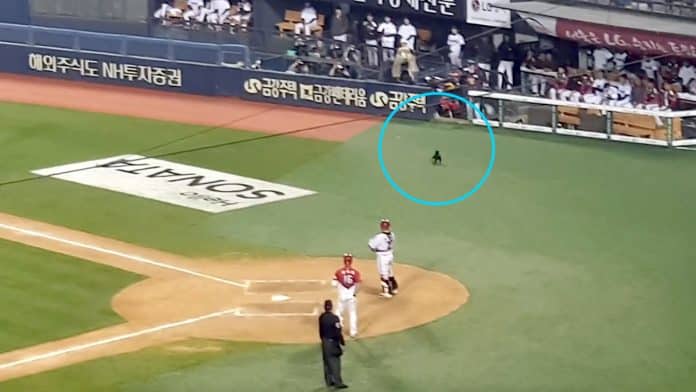 A baseball game was interrupted by an unexpected intruder in the form of a cat.

The furry critter managed to squeeze through a gap in the perimeter wall and dart across the top-tier game in South Korea between the Kia Tigers and LG Twins.

Fans can be heard cheering wildly as the cat sprints across the outfield at the Jamsil Baseball Stadium in Southern Seoul.

Beleaguered officials try in vain to usher the cat off the field, but the sprightly cat is too fast for them.

Eventually after giving the staff the run-around for a few minutes, one manages to corner the cat and lift him to safety over the perimeter wall.

Play resumed shortly after, but the home side Kia Tigers went down 9-2, which many fans blamed on the black cat being a bad omen for the team.