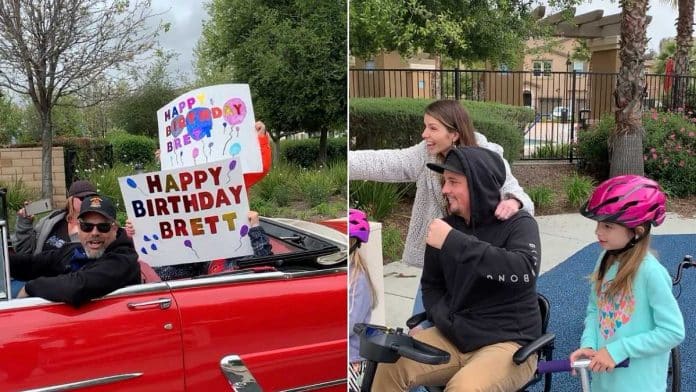 A former Marine and current police officer undergoing brain cancer treatment welled up as more than 100 friends and colleagues piled into cars to give him a drive-by parade he will never forget.

Brett Byler, 31, was diagnosed with an aggressive form of brain cancer in February, and since then his chemotherapy and radiation treatment has meant that Brett has been unable to have visitors due to the ongoing pandemic.

This lack of friendly interaction, combined with stay-at-home orders this year in San Diego, California, where Brett lives, have made the challenge quite isolating, his friends and family said.

So, on Brett’s birthday his wife Mariah, 27, managed to convince Brett to go for a walk around their neighborhood using his motorized scooter.

When he reached a nearby park, he was met by a fence that was decorated with birthday balloons – and soon the giant parade began.

A birthday parade has become a regular show of affection across America as it has been gripped by the coronavirus pandemic – but few have been on the scale of Brett’s.

After a fleet of police cars first came around the corner, bringing a tear to Brett’s eye, a further 120 cars then followed.

The moment was captured on video by his friends and family – many of whom said they were choked up at how much the parade meant to Brett.

Through sharing such videos, his family hope their positivity will bring awareness for Brett’s GoFundMe page.

Brett said: “It was emotional.

“I was immediately brought to tears when I saw my brother come around the corner to start the parade in his police car.

“It was unbelievable that that many people came, from every aspect of life. Old co-workers, friends from high school, admin from the schools I’ve worked at, people I haven’t seen in 10 years!

“I mean it was just incredible. The line of cars was never ending, it seemed.”