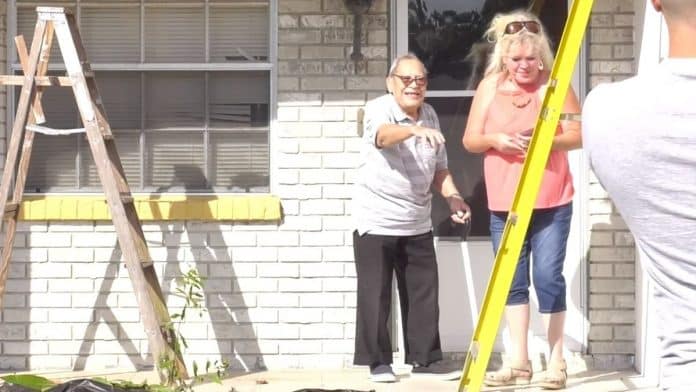 This blind World War II veteran was left in shock after a group of kind-hearted firefighters arrived at his doorstep one morning to paint and repair his home.

Veteran William Velez, 89, and his wife, Maria, couldn’t hide their delight as firefighters from the Hillsborough County Fire Rescue team worked their way around the house to give it a new lick of paint.

Previously the home had turned weathered grey color, but by the time Chief Dennis Jones and staff had finished with the Hillsborough County, Florida, home, on April 13, the abode was sparkling with vibrant shades of white and yellow.

The project was the fire department’s first year being involved in Paint Your Heart Out Tampa – an annual event in its 31st year, which sees groups come together to paint the homes of those in need.

The event has now reached a point where it extends outside the City of Tampa, and Velez’s home was one of the first to be painted in unincorporated Hillsborough County.

In the week leading up to task, young cadets and fire staff also spent time working on the bushes around Velez’s home, pressure washing the exterior, and also installing fire detectors.

Given Velez’s disabilities, he had not be able to maintain his home the way he’d liked, and Ken Forward, the Paint Your Heart Out Team Captain for the project, said he was told by Velez that the last time the veteran had painted his home was by himself, 17 years ago.

Speaking during the event, William Velez told firefighters: “You did wonderful things, painting my home and doing a lot of beautiful things for me and my family.

Chief Dennis Jones said: “The fire service is a community service agency – so we do more than just serve the community in times of emergency.

“Your tax payer dollars are paying for our salaries and for our facilities – we recognize that – and we want to give back to the community.

“It’s an opportunity for us to volunteer a Saturday and really make a difference in somebody’s life.”