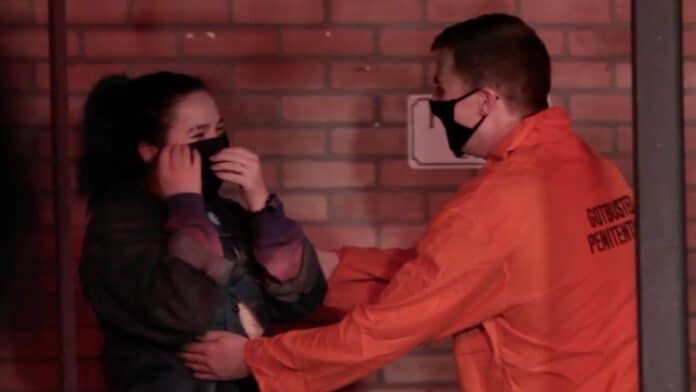 A writer and director was moved to tears when she headed on to the set of a jail scene, only to discover her military brother who she had not seen in nearly 10 months dressed as an inmate.

When Brie Tilton, 25, headed into the cell and pulled back the covers on the bed, she discovered her younger brother Colby, 18, who was dressed in an orange jumpsuit.

Brie was immediately taken aback by the surprise, which took place at LA Action Studio, Los Angeles, on March 7.

She then burst into tears and crouched on the floor, her hands covering her eyes in shock before Colby came over for a long-awaited hug.

Brie is extremely close to her brothers, and the last time she saw Colby was when he moved to Massachusetts in July 2021, to start his journey with the Army National Guard.

Colby then went off to boot camp at Fort Sill, Oklahoma, and after graduation, he headed to Leonard Wood, Missouri, for advanced individual training.

Having visited the rest of his family in Massachusetts in February, Colby was unable to see Brie because of her commitments in Los Angeles.

It was then that he decided to contact director David Rountree – the owner of LA Acting Studios and Brie’s writing and directing mentor – to plan a surprise visit.

David lead Brie to believe she was coming into the studio that morning to assist with a birthday surprise for an assistant director, Blake Nakoa.

Blake would be playing the inmate sleeping under the blanket, David told Brie, and when the cover was pulled back the studio staff would all come forward to wish them a happy birthday.

But, much to Brie’s surprise, Colby and Blake secretly switched places, so when she pulled back the cover, Brie noticed a far more familiar face staring back at her.

She said: “My brothers are my best friends, and when I finally go to see Colby I fell into complete shock and was so excited to see him.

“I was also overwhelmed with joy because I have such amazing people in my life here in LA, like David and Blake, that would go out of their ways to plan something like this with Colby for me.

“It’s hard to articulate how it felt to finally see him. It was almost surreal to think he was actually there.

“I really was in shock and it felt like the curtain kind of dropped from my eyes as I started to really piece together the little hints that David had been dropping for me the entire week that proceeded the surprise.

“Everyone that knows us knows how close we are, so the reaction to the video has been very sweet, and the couple of comments that are from people we don’t know have also been very positive and kind.”