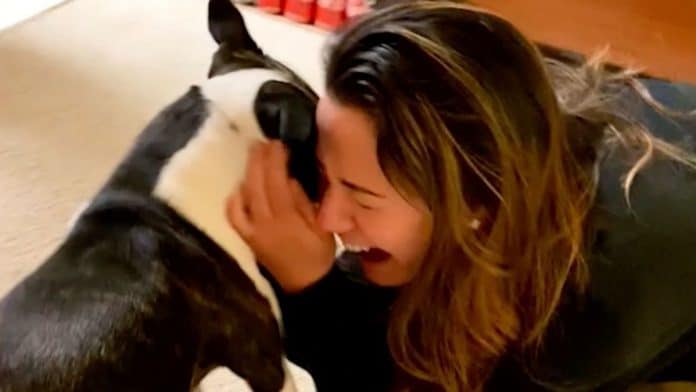 An owner and her lost dog couldn’t hide their excitement as the pair were finally reunited after nine months apart thanks to the help of strangers in a Facebook group.

In the emotional video, Elissa Battista, from Fairfield, Connecticut, let out screams of joy as her Boston terrier, Fisher, instantly recognized her and jumped all over his human.

It had been a tough 290 days for Elissa, who discovered Fisher had run away in summer 2020.

According to Elissa, 30, she and her family were at their vacation home in Ocean City, Maryland, on July 4, when a group of people setting off fireworks were believed to have scared Fisher.

The incident took place around 1.30am, Elissa said, but it wasn’t until the following morning she noticed her pooch had escaped out of a screen door and into the open.

Initially, she posted daily updates to the Facebook group as a means of spreading the word – but as hope waned over time, those posts became weekly and then monthly.

But thanks to the growing group membership, Elissa would still get messages with photos every day asking if it was Fisher, only for her to have to say that, sadly, it was not.

Elissa said she typed the denial message so many times that eventually her phone started to predict the response she was about to give.

But then, on April 20, a member sent a screenshot from another group, which she instantly recognized as Fisher from his markings.

Fisher was found roaming the streets of the Baltimore area wearing a collar his owners had not given him.

After Elissa’s husband, Matthew, 30, had spoken to the finders and helped arrange for a rescue to scan Fisher’s microchip, family friends in Annapolis then collected the dog while Elissa headed to their house.

Having made the five-hour journey from Connecticut to Maryland, Elissa’s friend Annie Gorksi, who had collected Fisher, recorded the beautiful reunion between the pair.

Elissa later shared the video on the Find Fisher! Facebook page, with the video quickly going viral spread by many who had been following the group from the first week.

Elissa said: “For the first three hours of my drive to collect Fisher I was just excited.

“But then it hit me: what if he didn’t remember me?

“So just before seeing him for the first time I was shaking – I was emotional and I was just so excited.

“There’s this rush that happened as soon as I got out of the car where I almost blacked out with happiness.

“I had that pit in my stomach hoping he would remember me then the minute I walked in and he ran up to me like that I couldn’t stop crying.

“He knew me. He knew he was home with me and safe and loved.

“The relief I felt is beyond anything I could imagine. My baby was back where he belonged.

“It’s cliche but my heart felt so grateful that each and every person in these last nine months who has been helpful on this journey, got our boy home.”