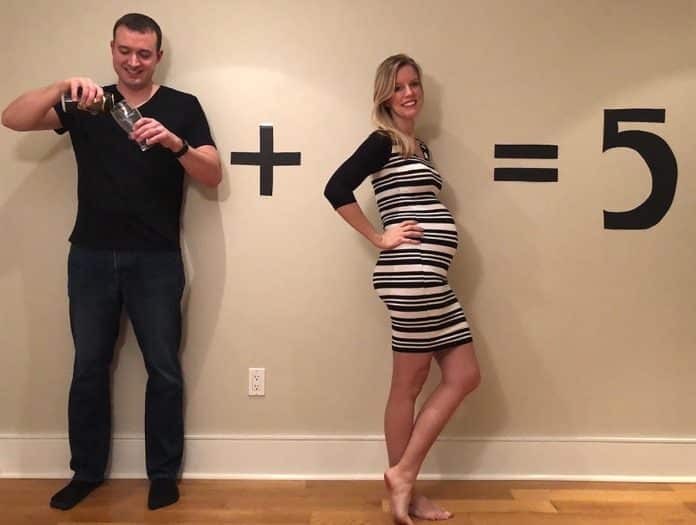 A couple announced they are expecting triplets to family and friends by showing them the sonogram and recording their hilarious reactions as they figure out the news.

Gini and Eric Rubega, from Boston, Massachusetts, have no history of triplets – or even twins – on either side of the family, and were in disbelief when they discovered the news themselves.

The pregnancy, which is referred to as ‘spontaneous triplets’ meaning no IVF or fertilization of any kind, is so rare doctors have estimated the chances are as little as 0.013%.

So the couple, who have been married four months, decided to capture the reactions of their loved ones when they broke the news to them in a series of hilarious pregnancy reveals.

-Scroll down to watch video-

Everyone, from their parents, siblings and closest friends were caught on camera completely gob smacked as they figure out what they are seeing on the sonogram.

Gini said: “My heart was pounding before we told everyone – we knew this was the biggest news we would share, probably in our lifetime.

“So we were patient and waited to tell as many loved ones as possible in person.

“Eric and I held onto the secret without telling anyone from October 17 to November 21. We then trickled the news out as we saw our families in person over the holidays.

“The last big reveal was December 29 so sitting on the secret was torture but worth it in the end – the reactions were priceless.

“When we were given the news ourselves my initial reaction was shock, confusion and disbelief. I don’t think I fully grasped the magnitude of what the nurse meant until we heard three beautiful heartbeats.

“I shed a tear or two, then we were immediately down to business scheduling appointments for ultrasounds and doctor visits for the next 3 months.”

Eric added: “Telling everyone was so much fun. I was nervous someone would find out the secret before we had the chance to tell them in person and video their surprised reactions – but we were able to keep it a secret and get so many genuine shocked reactions.

“Telling my parents was my favorite. These are their first grandchildren and they would have been so happy with just one baby – instead, they get three.”

After sharing the video on social media in January, Eric and Gini have had a chance to watch it back multiple times and relive the hilarious moments.

Gini said: “What surprised me was the amount of convincing it took that, no, this is not a ‘fake out’ as my big sister Nancy put it.

“Eric’s father, Bob, said ‘it is not triplets’ so emphatically that you’d think he was disagreeing with the sonogram and thought the doctors must have it wrong.”