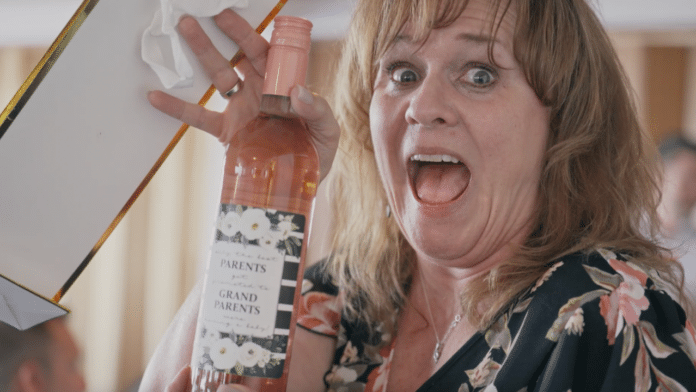 A couple who unexpectedly found out they were pregnant two weeks before their wedding announced the news to stunned guests on a series of wine bottles.

There were screams of shock and looks of disbelief as guests read the labels of the bottles handed out by the bride and groom Jessica Lemke-Kelsey, 33, and Matt Kelsey, 34, from Toledo, Ohio.

According to Jessica, she and Matt originally planned to try for a baby after their ceremony, but when she found out two weeks shy of the big day, they decided to come up with a unique way to break the news.

Jessica was initially hesitant, as she was only eight weeks pregnant at the time.

But the bride-to-be knew everyone would question why she wasn’t drinking, and so, with a videographer present anyway, she and Matt planned the surprise at their rehearsal dinner.

Matt got up thank everyone for all their help planning the event and being there through the difficult times – especially due to a previous COVID cancellation.

He and Jessica then handed out gifts to their families.

Everyone got a bottle of wine with a sticker indicating they were going to be grandparents, aunts, uncles, and so on.

The moment took place on August 6, 2020, but Jessica didn’t share the moment on TikTok until recently.

Speaking of her feelings during the surprise, she said: “I was emotional, excited and relieved that we didn’t have to keep the secret for our whole wedding day

“You can’t be upset when everything you’ve ever wanted in life comes to you, just because it’s not on your timeline.

“Obviously I was devastated we had to postpone our original wedding, but I still got the wedding of my dreams and married the love of my life – I also got the baby I always wanted, even if it was a little earlier than expected.”