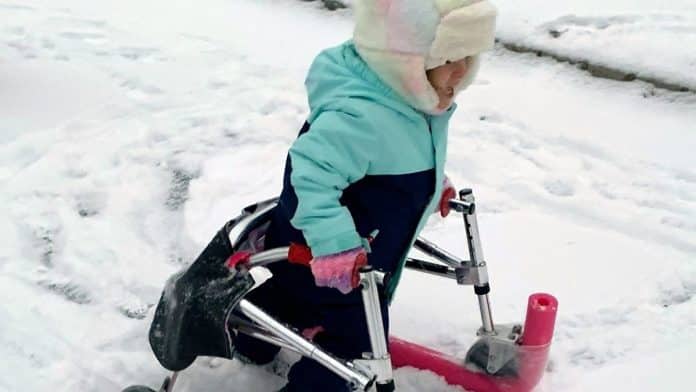 A girl with cerebral palsy who was told she may never walk was able to enjoy snow for the first time – thanks to an ingenious idea by her uncle to add pool noodles to the base of her walker.

While Winter Storm Orlena brought much of the Northeast U.S. to a halt, the Durborow family saw it as an opportunity for Colbie, aged three, to experience playing in snow for the first time.

The youngster received media attention in 2020, as, having been told by doctors she may never walk, she learned to use her stroller with the aid of grandmother Eleanor, 91, who has one, too.

But snow posed a bigger problem – that was, until Colbie’s uncle, Dan Goldstein, suggested adding pool noodles to the base of her walker, creating a ski-like system.

Colbie’s dad, Colin, followed the advice as part of a team effort, and, as a result, Colbie was able to slide her walker across the snow, rather than having legs get stuck at every step.

RELATED: Girl With Cerebral Palsy Who Was Told She Would Never Walk Again By Doctors Now Goes On Strolls With Great Grandmother With Identical Strollers

In the wholesome footage, Colbie is seen giggling as she strolls around in the powder outside her home, in Farmingdale, New Jersey.

She said: “I told my husband it felt like we gave her the best gift – being able to give her that independence and inclusion with other kids is something I can’t describe.

“There are a lot of moments I worry she will miss out on because things and places aren’t as accessible as they could be. “Her smile when she figured out she could run in the snow was priceless – she is still talking about it and wakes up asking to go outside it’s all she wants to do.”