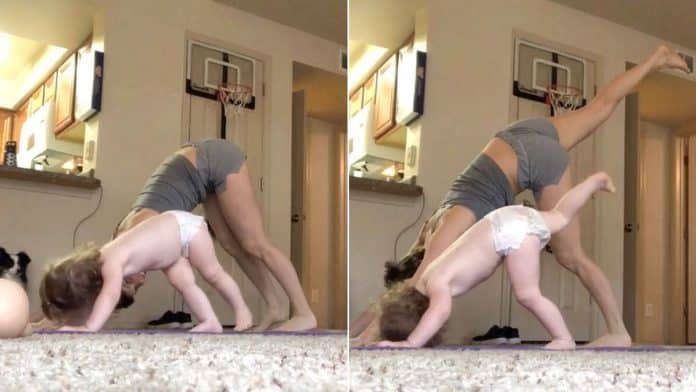 An adorable baby has been filmed copying her mom’s yoga moves.

But after her daughter Kaydence started watching her, she suddenly began copying the moves herself.

-Scroll down to see adorable video-

Amazingly, the 20-month-old has managed to perfect downward dog poses and other yoga moves that often leave adults in a sprawling mess.

Nicole said: “I do yoga every day and I record the sessions so I can review my progress.

“As a mom, my daughter would play around in the lounge as I did my thing.

“But now I will catch her doing it on her own and things like taking deep breaths when she is stressed. She has obviously observed me doing these things.

“After time, she started joining me on the matt and now she begs me to record us both.”

The videos have been a big hit online, with many yoga professionals commenting on the pair’s adorable daily routine.

Nicole added: “We have a lot of dun and it just goes to show the intelligence of children if we just take the time to teach them!

“She can already do the Downward Dog, head stands and forward folds.”