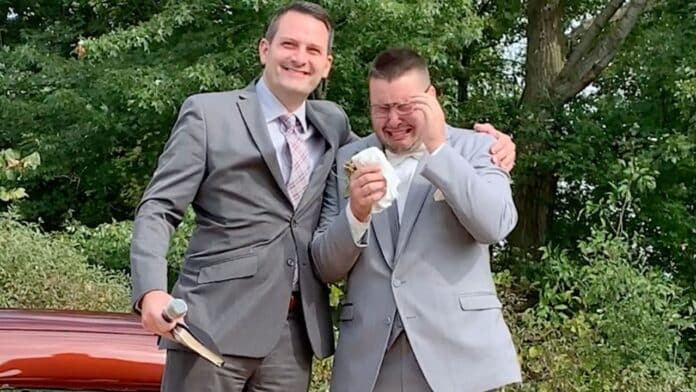 This groom’s wedding day is even more emotional than most – as he cries uncontrollably while his new bride walks down the aisle.

Garrett and Courtney Pace have been together since meeting at Central Michigan University back in 2015.

As their bond got stronger, he took Courtney out to go strawberry picking – just like they did on their first date – to finally pop the question, hiding the ring in a strawberry shaped box.

Five months before their ceremony, Garrett fulfilled his childhood dream of becoming a cop – giving Courtney’s parents, Gary and Sandra, the idea to have a cop car drive Courtney in for her big entrance.

READ MORE: Son Returns From Deployment To Surprise ‘Best Friend’ Mom And Walk Her Down Aisle

So, when the day of the wedding came, while Garrett was stood waiting for his wife-to-be, he was already starting to get emotional when the music began to play.

But his emotions quickly turned into tears when he heard the sirens of the patrol car, before bursting out uncontrollably as Courtney stepped out and walked down the aisle.

The sweet moment took place on October 5 2019, in Courtney’s parents’ backyard in Fowlerville, Michigan, but they recently shared the clip online where it immediately went viral.

Garrett said: “I looked up at the same time I heard the siren go off on the patrol car and I couldn’t hold it in.

“That alone meant so much to me because of my family ties and my desire to be a cop.

“Once she stepped out, I was even more emotional as I knew in my heart, she was my person.”

Courtney added: “I expected him to get emotional, but not that emotional – I knew he was going to cry when he saw me, but surprising him in a cop car made him even more emotional.”