Home Good News After 3 Years Apart, This Airman Surprises His Sister At Her Graduation 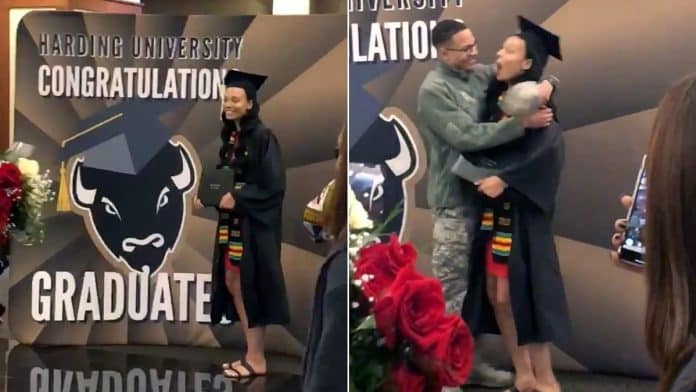 A shocked student received the ultimate graduation gift as she was surprised by her airman brother who she hadn’t seen in three years.

Makayla Twigg was completely unaware of the events in store as she posed for family photographs at Harding University in Buffalo, New York.

Then, while Makayla, 22, stood for the cameras, her brother Airman 1st Class Daylon Twigg, emerged from behind a screen.

Makayla, who is extremely close to her brother, let out a loud yell of disbelief, before diving into her loving brother’s arms.

Daylon had been stationed in Misawa, Japan, for the past two years before being based in Mountain Home Air Force Base, Idaho.

Ahead of the graduation ceremony, which took place on May 11, Daylon had broken the news to Makayla that unfortunately he could not make it.

Having waited backstage during the commencement program, Daylon then pulled off the big surprise after Makayla had crossed the stage and shaken hands with the university president.

READ MORE: Stunned Dad Hilariously Falls Over In Shock While Dancing As Navy Daughter Surprises Him By Returning Home Early After Two Years

Makayla, who studied broadcast journalism, said: “I was so shocked. He told me he had to work and couldn’t get off because he just got to his new station, so I wasn’t expecting him at all.

“He called me that morning before my graduation and was giving me a really sentimental, nice message about how proud he was, but I was kind of busy with moving out of my dorm at the last minute.

“I didn’t really have time to really talk to him, so I just planned on calling him back later – then he popped up. It feels crazy still.

“I wish I could relive that whole day over and over again because not only was Daylon a huge surprise, but I was surrounded by so much love and I really just felt proud of myself and like I had made all of my family and friends proud.

“That was a really good feeling.”