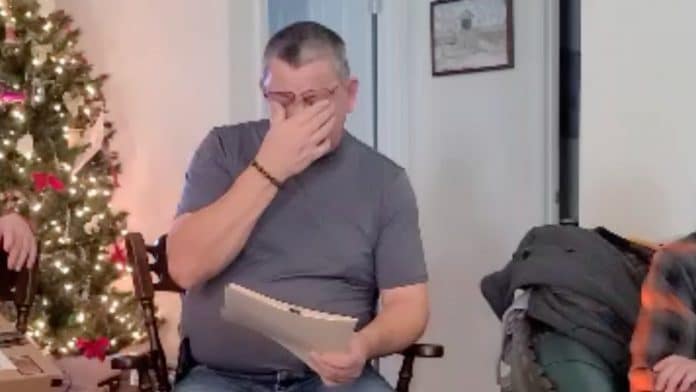 A man was brought to floods of happy tears as his stepchildren surprised him with an adult adoption request 18 years in the making.

Ben Lewis, 56, came into the lives of siblings Nikki Henderson, 38, Jessica Godfrey, 34, and Thomas Johnson, 30, in 2002 and never treated them differently to his own kids, the trio said.

Nikki said despite the formative years of their relationship coming mainly when they were adults, Ben still acted like a father figure coming up with dad jokes, advice and moral support.

So, one-night in 2020, Nikki was lying in bed and realized Ben could adopt the three adults with their consent, and so she sent a text to Jessica and Thomas, who wholeheartedly agreed.

The siblings decided the adoption request would be Ben’s Christmas present, and after Jessica drafted the documents, the group placed them in an Amazon box filled with shredded paper to disguise the gift, leaving it under the tree.

On Christmas Day, after all other gifts had been opened in Ben’s Florida home, the siblings casually said: “Oh, we forgot one,” and passed it to their stepfather.

Nikki’s husband Brandon began to record the moment, with Ben slowly digging through the paper to find the documents.

As he picked them up and began reading, everyone else in the room was already crying happy tears in anticipation, before Ben, as the moment hit him, followed suit.

Nikki, who also lives in Milton, Florida, said: “I don’t think I have ever been so nervous, wondering if he would say yes or no.

“He reacted exactly as I had hoped he would, with happy tears and a big ‘YES!’

“I’ve gotten a lot of positive comments and likes online, as people who know us know our story and are thrilled.

“People who know Ben have been congratulating him and us, because they know he is an amazing man and we love him so much.

“This whole thing is really just a formality; we all already know in our hearts that Ben is our dad.”