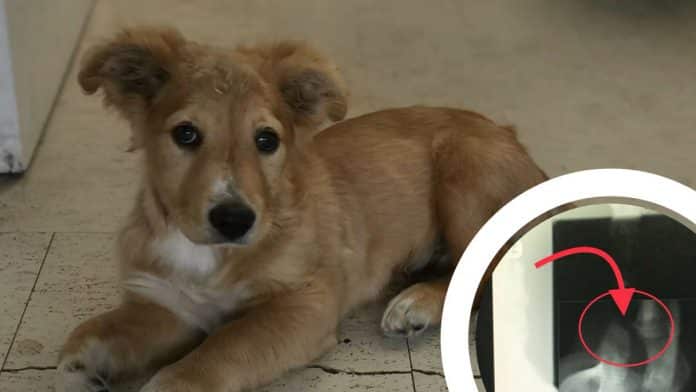 Meet Marlo – an 11-week-old puppy who despite being born with two complex fractures in her front legs has refused to give up on life.

Marlo was found as a stray – likely abandoned as a pup after being abused – unable to use either of her front legs.

X-rays revealed she had two broken and dislocated legs at the humerus.

But despite her troublesome start to life, the retriever and collie mix loves nothing more than playing fetch, laying in the sun or messing with her toys.

She happily rolls around, begs for belly rubs and smiles for the camera when her temporary foster parents at CARES animal shelter in Clarksdale, Mississippi, take pictures.

The playful pup has stolen the hearts of her carers.

Paige Daugherty of CARES Clarksdale, said: “She so wants to be a normal pup.

“She loves playing fetch, lying in the sunshine and playing with her toys – just like any other puppy.

“To get around she lowers her head and pushes her body around face first. She essentially scoots around.

“She seems to be in no chronic pain, and with the use of a wheel cart, artificial prosthesis, and medical intervention, we believe she can one day run again.”

Marlo is currently doing well and been placed with a temporary foster family.

Paige added: “Marlo’s adorable personality makes her adoptable, but her disability holds her back.”

The inspirational pup’s impact has been so strong, that CARES Clarksdale volunteers are determined to help get her legs fixed so she can walk again.

First they hope to purchase a doggie-wheelchair, to give her back her independence and help her move around without dragging her head along the floor.

Then with the help of artificial prosthesis and surgery, they hope she will one day be able to play her favourite game of fetch just like every other dog.

Paige added: “She’s a great candidate for a doggie-wheelchair, which would get her head off of the dirty floor – but each one costs between $500-600.”

You can donate to Marlo’s cause via https://www.youcaring.com/caresanimalshelter-1183266