Home Good News 90-Year-Old Beams With Delight As He Plays In Park For First Time... 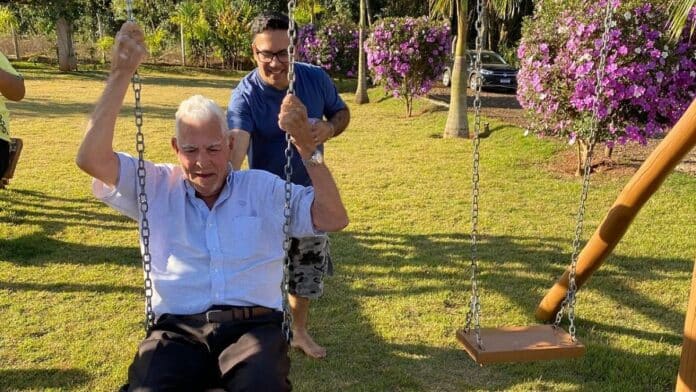 A beloved grandpa could not hide his joy when he got to play in a playground for the very first time at the age of 90.

Pedro Oliveira had never had the chance to play on a swing or a seesaw – but on July 25, that was all about to change when he attended a family member’s birthday party.

At a farm near Londrina, Parana, Brazil, Pedro asked his grandson, Ludson, if he could play in the nearby playground, too.

There, Ludson pushed his grandfather on a swing and rode a seesaw with him – with Ludson’s wife, Joeline, recording the 90-year-old’s joyous reactions on video.

READ MORE: Devoted Grandpa Surprises Sister After Half A Decade Apart With Help From Granddaughters

Joeline, who later shared the video on Instagram, said: “It was the first time he ever played in a playground and loved it.

“I felt very happy to see someone at his age with so much health and joy.

“I got so excited and surprised to see the number of comments and likes on my Instagram.

“We need to appreciate older people, and value spending time with them.”