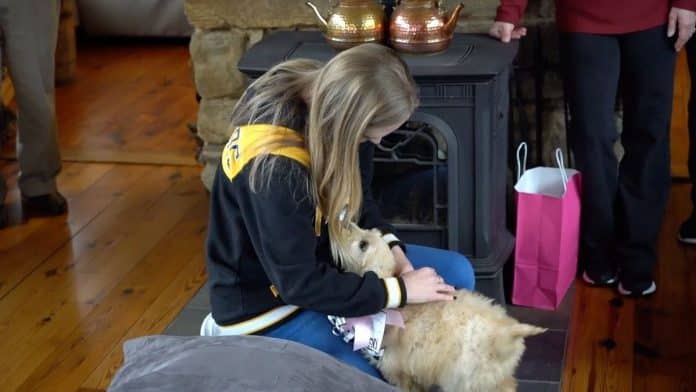 This is the emotional moment a woman struggling with the loss of her veteran husband was surprised with a puppy by her close-knit group of cousins and named it after her husband.

Kasey Montgomery, 35, has no siblings and no children of her own so her bond with her cousins is extremely strong.

In February, Kasey, from Rural Hall, North Carolina, tragically lost her husband of 10 years, Matthew Montgomery, a veteran of the U.S. Navy and an all-star athlete in his youth.

Matt had underlying health conditions and having been treated for a sudden ruptured ulcer in his stomach, complications meant he never woke up from sedation.

Kasey was devastated so her cousin, Amy Vaughan, wanted to do something to help.

Knowing Kasey had been staying with her parents since Matt’s passing on February 25, Amy asked them if she would like a puppy for companionship.

Kasey’s parents agreed a puppy would be a great idea, and so Amy and four other cousins – Lisa, Heather, Mark and Melanie – grouped together to get an adorable goldendoodle pup.

On March 15, Kasey thought she was attending a ‘birthday party’ but was surprised by around 30 of her closest friends and family, including all the cousins and Matt’s sisters.

She was then brought to tears by the bundle of joy trotting around on the floor, who Kasey immediately headed to pet and cuddle.

Since then, Kasey has named the lovable pooch Gumby – Matt’s nickname.

Amy said: “I think she was in shock for a minute, and the rest of us were shedding happy tears.

“They immediately bonded, and in the weeks Kasey and her parents have had her, she has been dubbed Queen Of The Castle.

“Gumby girl, the goldendoodle, may not technically be a therapy dog, but I honestly don’t know what else we could’ve done for Kasey that could comfort her on a daily basis and bring her some much-needed joy.

“I feel certain that this fur baby was created for, and was waiting on, Kasey.”

Kasey said: “Having Gumby has given me something to smile about when I feel I can’t.

“Our families are very close and I’m so grateful for what they’ve done.”