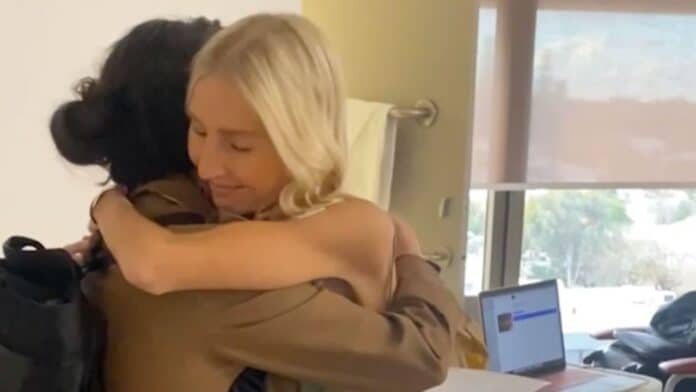 A woman whose friend traveled thousands of miles to help her through a debilitating illness decided to return the favor once COVID restrictions had been lifted, jetting to see her after months apart to surprise her for her 30th birthday.

As Aimee opened the door of her home to discover her best friend, Charlotte Maddock, 30, she immediately put her hands to her mouth and sobbed with emotion.

The pair have been best friends for years, with there being numerous examples of how deep their bond runs.

Charlotte asked Aimee to be the maid of honor at her wedding in 2018, and each year the pair – who have both lost parents – send each other cards on the anniversary of those family passings.

In 2021, Charlotte’s endometriosis started playing up, and when surgery didn’t fix it, she was in and out of the hospital, taking “so much” medication and not being able to walk or eat because of the pain.

Aimee worried Charlotte might not pull through, as her friend continued to lose weight and doctors could not work out her diagnosis.

Eventually, Charlotte was diagnosed with chronic pelvic nerve pain – caused by endometriosis – and after months of doctors not knowing the cause, she developed a number of other issues.

Charlotte, who lives in Western Australia, said her hospital stay was tough, as she battled through blood clots, hypoglycemia, and hypotension.

Every day, Charlotte was also weighed and her food was monitored in three-hour schedules.

During this time, Aimee did not think twice about flying from her Auckland, New Zealand home – the country where they grew up – to pay a visit to her best friend in Perth, Australia.

The visit really boosted Charlotte’s spirits, and after she got better, she and her husband, James, tried their best to get home to New Zealand, which still had strict travel restrictions in place.

Eventually, the couple had a voucher issued after waiting for the MIQ (Managed Isolation and Quarantine) lottery.

They isolated in a hotel, recording short snippets of videos about how happy they were to be surprising Aimee, who they had not told about their trip.

Charlotte said: “We worked out that if all went to plan – we didn’t get Covid during hotel isolation – we would be released from our MIQ hotel one day before my best friend’s 30th birthday.

“Amiee has done so much for me over the years; she has been absolutely unwavering in her support throughout every single up and down in my life and it just felt like I was being gifted this incredible opportunity  – to make a special memory with one of the people most special to me in the world.

“It was amazing. And very teary.

“I knocked on the door, her partner, who was the only person in on the surprise, asked her to answer it, and before we even got close to hugging, we were both crying.

“It was special beyond words.”