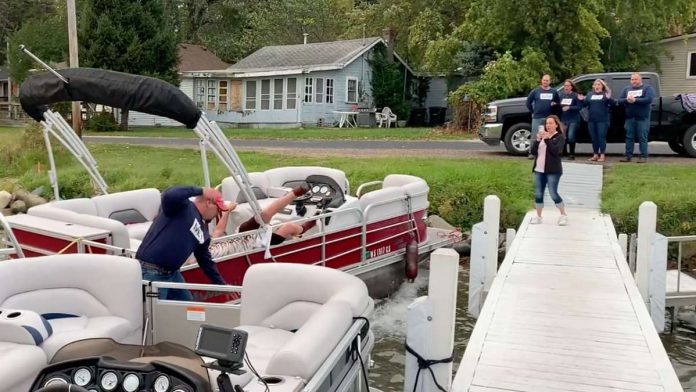 A couple’s engagement got off to a rocky start after the wife-to-be accidentally hit the throttle on her boat, causing it to crash and send her fiancé flying into the water as he proposed.

As part of his picturesque proposal, Colton Brownlee, from Lake Geneva, Wisconsin, planned to pop the question to his girlfriend, Julie Palmer, as she docked her boat on Lake Como.

The stage was set as on September 26 he had lined up a group of friends on the bank with t-shirts reading “Julie Will You Marry Me?”, which they were all set to reveal.

But as Julie headed into the dock, Colton realized they had left another one of their boats on the pier, requiring him to head out and step over the other boat to help bring Julie ashore.

As he stood across the two boats, Colton, 30, decided the time was right to ask the big question, bringing a stunned Julie to say, “Yes.”

But as Julie, 45, moved forward to kiss her new fiancé and accept the ring, she accidentally hit the boat’s throttle knocking Colton into the water and her boat shooting into the pier.

Fortunately for the couple, a soaked Colton managed to keep a hold on the ring box, before friends helped Julie push her boat back into the water.

Colton said: “We have a great relationship and family, and stuff happens – things don’t go as planned all the time but we have a memory that will last a lifetime together.

“You hear my good friend George say in the video, ‘It’s like a fairytale,’ and in reality, it kind of is.

“I got to show the world how much I love this woman and that I want to marry her after five years together so to me it is like a fairytale.

“I somehow managed to hold on to the ring during the whole process of being knocked in the water.

“I guess it was a pretty good box because I slammed it shut and squeezed tight.”