Home Animals Woman Rescues Dog Injured By Car And Nurses Her Back To Health... 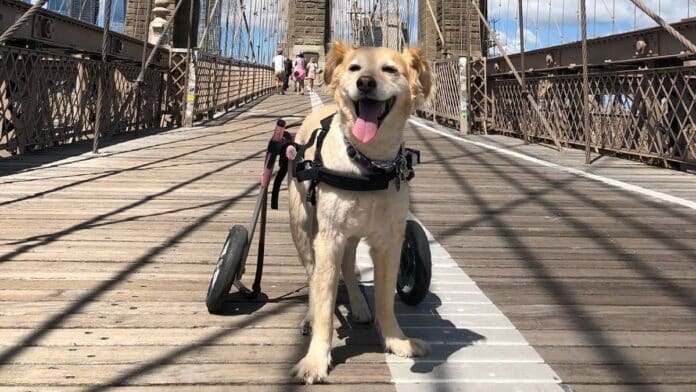 A woman who rescued a dog badly injured after being hit by a car in Mexico has helped turn her life around with the aid of a doggy wheelchair.

Erica Loring from San Diego, California, has been rescuing animals her whole life, with even her first word being ‘dog’, not ‘dad’.

In 2011, Erica noticed a social media plea for people to donate to Baja Dog rescue shelter, which helped save over 100 Mexican street dogs from often squalid conditions, including hoarding situations.

But instead of donating Erica believed she had what it takes to adopt a dog even though she had no previous experience.

So on February 29th, 2011, the owner of the shelter drove to Erica’s home hoping she would take a disabled dog which Erica accepted.

The dog had been found in a hoarding situation within an abandoned motel in Mexico and was suffering badly from injuries suffered after being hit by a car.

Erica was given medication for the dog whose hips had been crushed, her back had been broken, the nerves in her spine were damaged along with many other injuries.

As the pooches’ back legs didn’t work it took two months of therapy until she was able to stand on her own, and four more months before she was able to push herself around.

This pushing motion used by the dog gave Erica the idea to call her Scooty as she “scoots herself about”.

As soon as Erica adopted Scooty, she began a fundraiser to raise enough money to purchase a custom wheelchair.

And miraculously within a week, she was able to get her hands on one thanks to kind donations from family, friends and work colleagues.

Once getting the wheelchair, Erica tested it out on Scooty, and as soon as she popped her in the chair Scooty was running around with no problems.

READ MORE: Dog Mom Worried Her Husky Puppy Would Forget Her While On Deployment Greeted With Excitement

Since then, Erica has also adopted another disabled dog named Wyatt who was about to be euthanized.

The two dogs are now best friends and travel the world together, along with Erica.

Erica said: “I decided to take her on not knowing anything about a handicapped dog whatsoever or having met her or knowing what kind of care she was really going to need.

“I figured if everyone was going to have a dog that was handicapped and successfully do it, it was gonna be me as I have the patience of a saint when it comes to animals.

“Watching her cruise along in her wheelchair is amazing to watch.”

“She’s the happiest dog in the world.”