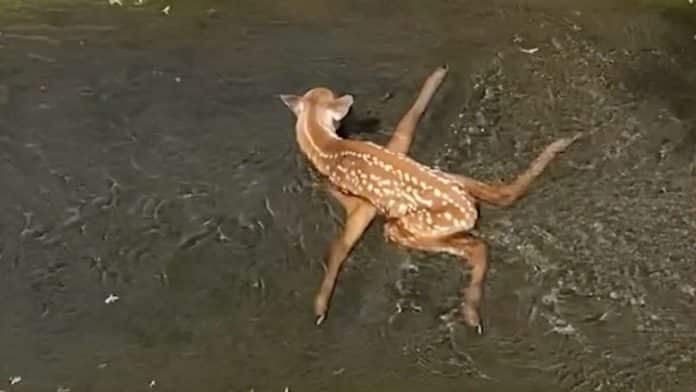 An animal rescuer has gone viral after she rappelled into a drain culvert to rescue an exhausted trapped fawn.

In the wholesome video, the fawn is initially seen trapped in the culvert, with its legs spread as it lies in the shallow water, unable to escape.

As Erica Miller, 41, assessed the situation in Centerville, Ohio, on May 20, she attached a rope to a nearby tree, allowing her to abseil into the drain to collect the creature.

Having entered the culvert, Erica said as she scooped up the deer, she noticed it was very cold and out of energy from its struggle, which locals were alerted to after hearing the fawn crying.

She then put the fawn into her son’s backpack and proceeded to climb out of the waterway.

Erica is a volunteer for the state of Ohio, licensed in wildlife rehabilitation, and after returning the fawn to a normal temperature, the animal was eventually reunited with its mother.

Nearby, her daughter, Grace, captured the moment on video and after the rescue shared her mom’s heroics on social media – where the video received more than six million views.

Erica, based in Miamisburg, Ohio, is called upon when people find injured, abandoned, or orphaned animals, as she’s listed on the state’s Natural Resources site for licensed rehabbers.

She said: “I didn’t know that the video would be shared so many times – the comments keep me going because wildlife rehab can be challenging and upsetting at times.

“People like good stories with good outcomes, especially when it comes to baby animals and I hope people can take just a little break in their day to watch something positive.

“If I make someone smile, I’m happy – andI bet that mama deer smiled.”