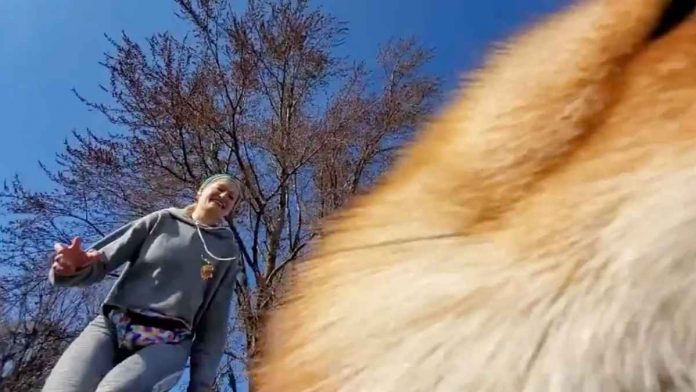 A video of a crafty fox has gone viral after he snuck up on a woman who was filming her yoga routine and ran off with her iPhone.

In the hilarious footage, Mikayla Raines can be seen coming into frame, getting ready to strike her first pose as Dixiedo, the fox, walks in front of the camera.

Then, as Mikayla moves to get into position, the camera suddenly jolts and a flashing of grass can be seen in the free as Dixiedo runs away.

The moment took place at SAVEAFOX RESCUE, in Faribault, Minnesota, on April 5, and the video has received more than two-and-a-half million views on the foundation’s YouTube channel.

Mikayla is the founder of the rescue facility, and activity such as yoga around the animals are seen as enrichment activities for them.

After chasing a panting Dixiedo, Mikayla retrieved the phone, which the fox tried to bury.

Mikayla said: “All of the rescue staff and volunteers were in stitches – it’s really brought a smile to people’s faces, and it’s been shared all over the world.

“Everyone has been really positive and it’s brought a lot more people to our social media to learn about the plight of fur farm foxes and mink.

“SAVEAFOX RESCUE was founded in 2016 to rescue foxes from fur farms, abuse, neglect and hoarding situations, and as a safe place to land for pet fox surrenders when people get in over their heads or can no longer care for them.

“We’re glad we can make people smile whilst still providing vital education on these issues.”