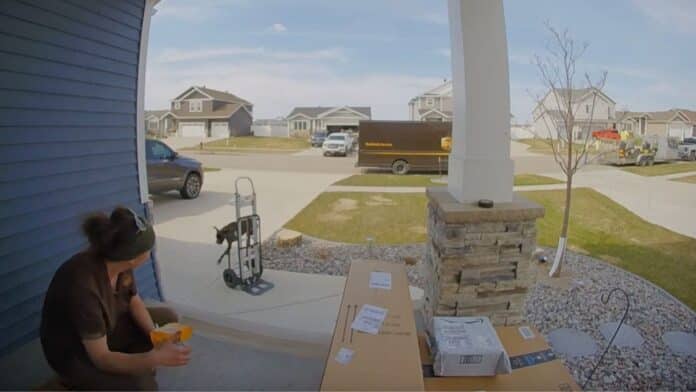 A quick-thinking UPS delivery driver rescued a dog that escaped from its home while they were delivering a parcel.

The driver, Ashley, successfully delivered the package, but dog Bentley snuck out of the door and ran straight past her into the street.

Bentley’s owner, Jason Christopherson was in the backyard with his children – and he thought Bentley – unaware of the commotion happening out front.

But undeterred, a cool-headed Ashley quickly grabbed some dog treats from her van and enticed Bentley back to the house, before locking him inside.

Jason only became aware of what happened when his wife alerted him thanks to notifications from their doorbell camera – much to his shock as Bentley was already back next to him.

He said: “I went and watched the Nest cam and was like ‘Holy cow, someone literally saved the dog.’

“It could have been the difference between explaining to a one- and a five-year-old that their dog’s not coming back home ever again.

“It means the absolute world to my wife, my kids and I – I don’t even know that I could put into words what it would mean to save him from the worst-case scenario.

“I’ll be forever grateful to Ashley for the one deed and I’m also happy to know that there’s people in our community that think like that and act like that.

UPS, in a statement, added: “Oftentimes our drivers are in the right place at the right time to help.

“And we are always proud when they take action when they see a person or animal in need.”