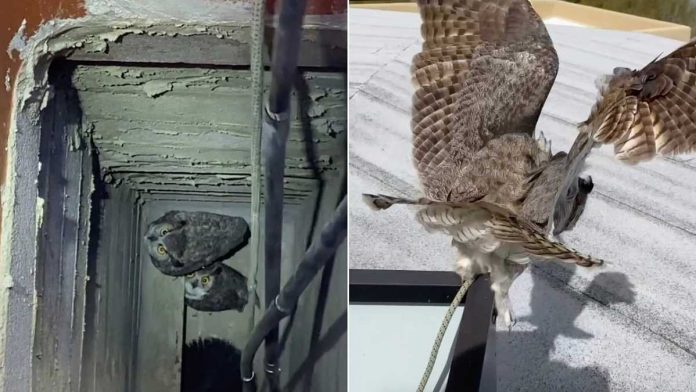 Two owls who became trapped in a chimney stack were rescued and released, with the female going on to successfully lay her first egg a week later.

Photographer Laurel Strohmeyer has been closely monitoring the Grey Horned owls that have taken to nesting nearby her home in Scottsdale, Arizona.

She set up a Nest camera to track their comings and goings but was shocked one day when she watched the footage to notice the female, who she named Bella, was missing.

Footage recorded on a GoPro camera shows her mate return with food but looking around baffled as Bella is no longer present.

Having got to know their movements, Laurel instantly become concerned and knew something was up.

The next morning a neighbour reported that two owls were trapped in their chimney.

And so began a rescue mission with the help of a local chimney sweep.

Using first a chimney brush lowered into the chimney stack, Bella hopped on and they were able to gently lift her out, before she flew off back to the nest.

But the second younger male refused to play ball – staying resolutely stuck to the bottom of the chimney.

A quick-thinking chimney sweep then used a larger roll of wire mesh, which obliging the younger owl stepped onto allowing them to lift him to safety, too.

Laurel said: “When our female Great Horned owl, who I call Bella failed to respond to her mate’s call early on the morning of Feb 10, 2020 I became concerned that something might have happened to her.

“Not two hours later I received a call from a neighbor stating there was a Great Horned Owl trapped in their chimney.

“I went over immediately to help and when I had a look above the 4″ slot of the damper, I saw two owls one large and one smaller.

“The larger was the female “Bella” who did not respond to her mate’s call.

This female was right smack in the middle of her mating period and was within one week of laying her eggs.’

Thankfully the chimney was clean and free from toxins which could have harmed the health of the birds.

Laurel continued: “I follow the pair closely and knew one of their offspring from last season was still in the area.

“Her young offspring had somehow fallen into the chimney and must have cried for her.

“She responded and went in after him leaving them both trapped.

“We called a local chimney sweep company called ‘Honest Abe’s’ to see if they could help.

“A fellow named Chris came out and indicated he had experience with getting birds out of chimneys.

“He explained that he would lower down a chimney brush with the hopes that the owls would climb on and be pulled up and out.

“The first to come out was the mother Bella who returned immediately to her mate.

“The youngster proved to be a bit more difficult and would not get on the brush.

“Next we tried lowering a roll of wire mesh down and finally after another hour the youngster climbed on and let us pull him up.

“That evening Bella was spotted with her mate and all seemed perfectly normal.”

Incredibly, despite the potentially stressful ordeal, Bella was spotted a week later on the Nest camera laying her first eggs.

She is now incubating three of them.

Now watch the video below