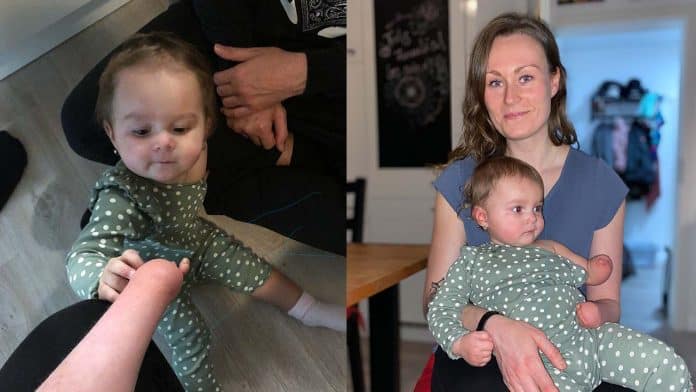 A toddler born with one arm met an adult with the same condition captured in a wholesome video.

Having realized that, like her, Sophia has a stump at the end of one of her arms, the happy toddler reached out with her own shortened arm to touch it.

The moment took place on February 23 and was captured on video by Leia’s mom, Naomi Krisvany Wolf Matheus.

Despite her condition, Sophia has played handball in her native Germany for 15 years and also studied sports science after finishing high school.

When she found out through an online posting that Naomi was set to give birth to a one-handed child, Sophia reached out to say she wanted to help.

The pair had never met before but by meeting Leia Sophia hopes to inspire her to believe that anything is possible.

READ MORE: Baby Born Without Arm Has Beautiful Reaction to Trying on Her Prosthetic for the First Time

Sophia and Leia have met twice in person to date – their second meeting in February being the first time Leia realized Sophia had the same condition as her.

Sophia, who is originally from Brandenburg, said: “I want to be a support for Leia and her parents.

“I want to accompany them during good and bad moments.

“I want to be a role model for Leia and to show her that she can achieve everything in life, that she is great the way she is.

“I want her to always be able to contact me and I can help her when she needs it.”

Naomi said: “Leia loves Sophia so very much – she is like the no-hand godmother to Leia.

“I hope people watch the video of Leia and Sophia and realize that you can achieve anything.

“We are very thankful to Sophia as she took us through a lot of our insecurities before Leia was born, so I was relaxed at the birth of our baby.”