Home Good News Special Ed Teacher Invites Pupils To Walk Down Aisle With Her On... 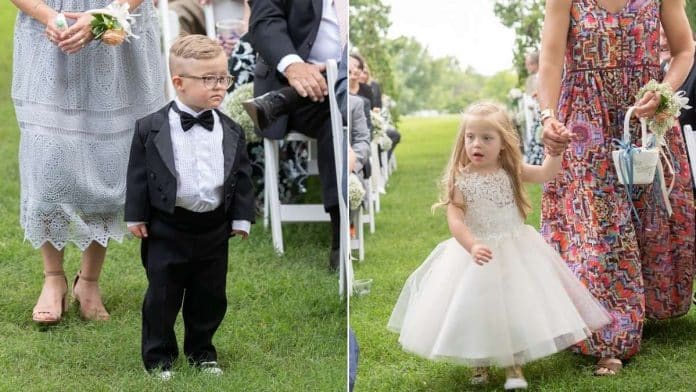 A special education teacher sees the children she teaches so much “like family” that she decided to have them become a part of her wedding day.

Sarah Sullivant, 28, teaches at The Little Light House in Tulsa, Oklahoma – a developmental center for children with special needs.

Ahead of her big day, Sarah and her now-husband Seth, 28, decided that they would like to include four children who Sarah teaches – two boys and two girls – in the celebrations.

Sarah said she was determined to have the kids attend because many would never be asked to other weddings because of their unpredictable behavior.

Staff at The Little Light House preach inclusivity, so through many hugs, tears and smiles, she gained permission from the four parents she asked.

On the day itself, two students played the roles of flower girls, while two others were ring bearers.

One student in attendance was Arya, 4, who is diagnosed with Down syndrome and, at the time of the wedding, was in remission from fighting cancer for the second time.

When the kids came down the aisle there was not a dry eye in the house, Sarah said.

Sarah, who married at the Southern Hills Country Club on May 25, 2019, said: “Aside from marrying my best friend, having my students in our wedding was my favorite part.

“There was not a dry eye at the ceremony.

“The tears were not, however, because they felt sorry for them.

“They were crying because they saw how perfect they were.

“It didn’t matter if they ran down the aisle, sat halfway through, or walked down perfectly – they were authentically and beautifully themselves.

“They were the stars of the day, and we wouldn’t have had it any other way.”