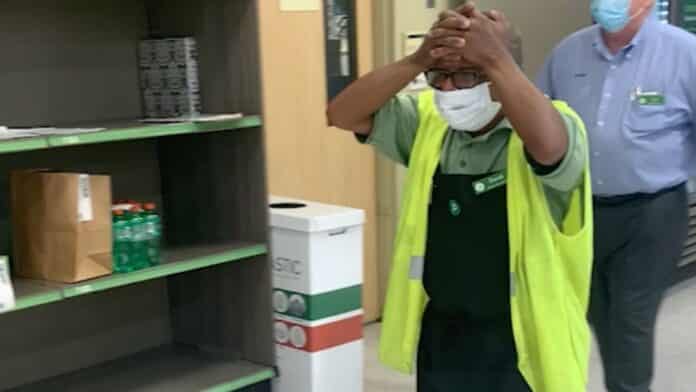 A grocery store worker who has special needs couldn’t hide his delight when a regular customer at his store surprised him with his dream guitar.

For the past few months, Chris Glover, 50, has been carrying out most of his family grocery shopping while wife, Jennifer, 38, is battling stage IV cancer so must isolate.

And while at his local Publix in Orlando, Florida, Chris found a friend in Derek Woods, 27, who works at the store and the pair would often strike up a conversation.

One day, Derek, who has special needs, asked Chris if he plays any instruments before revealing he was saving up to buy himself his dream guitar, a Gibson Les Paul.

Every time Chris visited the store, he asked Derek if he’d been successful in his saving goals, but when the answer continued to be no, Chris decided to take matters into his own hands.

Having consulted with Jennifer, Chris – a musician who has played music around Central Florida for a number of years – decided to order an Epiphone Les Paul Studio LT with a Sunburst finish online, which he planned to give to Derek as a surprise.

Chris had the instrument shipped to his house, and on August 16, knowing Derek worked Mondays, arrived at the store and alerted one of Derek’s managers of the plan.

Having seen Derek in the parking lot, Chris asked him to come inside, where he presented the supermarket worker with a box.

Chris then asked Derek if he was still planning to save for a guitar, and when he confirmed he was, it was time to open the box for the big reveal.

Once the surprise hit Derek, he began pacing back and forth with excitement, with Jennifer capturing the wholesome moment on video.

Chris said: “Derek’s reaction was priceless – it brought Jennifer and I so much joy to see his reaction and excitement.

“It’s not every day some random customer gifts an employee with a brand new guitar.

“Many local shoppers have commented on the video and have shared their past interactions with Derek and he has quite the fan club.

“People have come up to him in the store since the video and asked him about his new guitar and he happily tells them all about it.

“Derek always has such a positive attitude.”