Home Good News Reverend Whose Service Was Set To Be Empty Because Of COVID-10 Cannot... 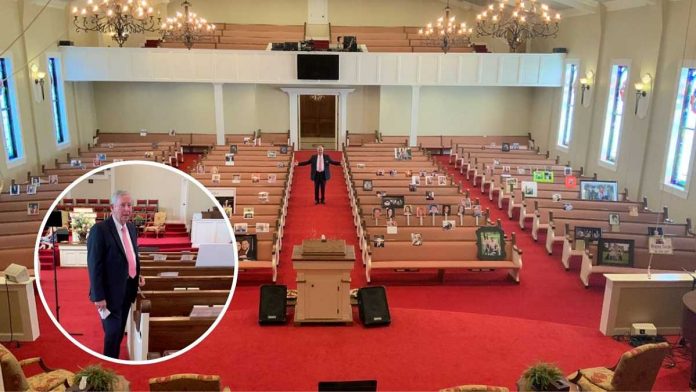 A beloved reverend was brought to tears when his absent congregation surprised him by thoughtfully leaving photos of themselves on their seats.

With mass gatherings cancelled in the state of Mississippi, Reverend Larry Duncan was facing the sad prospect of not having anyone at his weekend service, at Salem Baptist Church, in Lake.

But as he walked into the church, on April 11, Larry was met with a beautiful sight.

In front of him he found 98 different photographs each depicting the face of a regular attendee.

Looking out onto the sea of faces – all in their usual seats – made Larry, 71, well up as he walked between the aisles checking out the faces of his beloved congregation.

The idea for the big surprise came from a churchgoer, Amy Clay, who reached out to Larry’s daughter, Natalie Emmons, 41.

Natalie made a few phone calls to get the word out and after a drop-off location had been selected for the photos to be left for the church in a safe manner, Natalie and her family spent a day lining up the images for her dad.

Since the video was shared on the church’s Facebook page, it has received a viral response of millions of views.

Natalie recalling her father’s reaction explained: “He said it felt like being reunited with your family that you had been away from for a long time.

“I knew when he walked in the door that we had captured something special.

“Distance may separate us and circumstances may prevent us from gathering, but God’s spirit in his people is alive and well.”