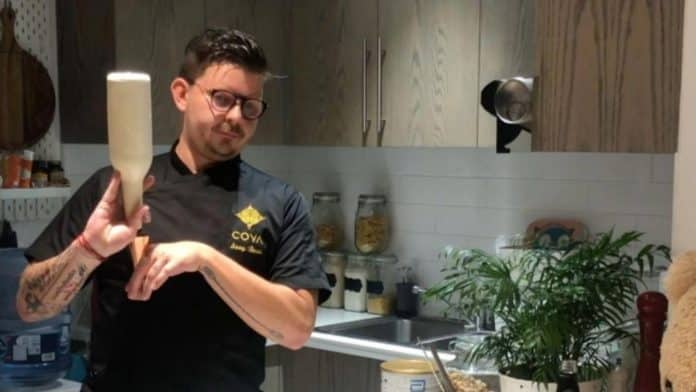 A professional bartender has gone viral after sharing a video of him making his toddler son a “Tinytini” cocktail during lockdown.

In the adorable video, Sany Bacsi, 36, stands behind the bar in his home in Dubai, while his son, Sasha, who is nearly two, sits on the other side.

From there, Sany, who works at COYA in Dubai, proceeded to mix his son’s morning drink – which is essentially Similac3 growth formula and pre-boiled water.

Going through the usual cocktail-making process, Sany even taste tested the cocktail, showed his son what he was mixing, and used all the usual tools of his trade.

The footage ended with Sany handing the bottled Tinytini to his son, who duly accepted a drink to compliment his gingerbread man snack.

The creation process was shot on May 30 after a friend shared a video of himself entertaining his child during lockdown.

Sany, who is originally from Hungary, posted the video on social media, where it has received more than 10 million views and thousands of shares all over the world.

He said: “The choice of this particular scenario was easy and obvious to me as I have been a bartender for over 15 years, so I am very familiar with these moments.

“Sasha’s reaction to the cocktail and the process was amazing, he was fully engaged – it’s barely visible on the video but he was constantly talking to me, demanding and instructing what to do.

“He only speaks his own language, but the tone of his voice and hand gestures were unmistakable: ‘Pour more,’ ‘Give me the bottle.’

“I am getting messages from all over the world, from South America through Europe to Singapore and Australia.