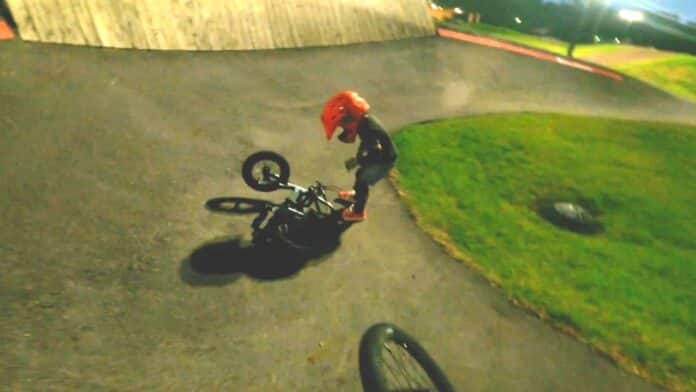 A mountain-biking teenager received an outpouring of love online after his headcam captured the moment he helped a four-year-old who had crashed and had no one around to help him.

In the clip, 17-year-old Eli Shoe can initially be seen heading around the expert line at the Railyard Bike Park in Rogers, Arkansas, on July 2.

But as Eli made his way around the course, something caught his attention on the trail next to him.

There, Eli said he first heard and then discovered, a crying youngster – a boy by the name of Saylor Groff, 4

Saylor had come off his bike and was in a blind spot where his parents could not see him, Eli said.

Eli immediately headed over to the boy, asking him, “Are you okay, buddy?” and then offering a reassuring word: “Everybody crashes sometimes, okay.”

The teen helped Saylor to his feet, offering him a fist bump and praising him for how tough he had been.

Eli then presented the four-year-old with a sticker – a reward, he said, for being so brave.

He later shared the video online, leading to his channel, NWA MTB, receiving a swell of new followers and a number of well wishes on Instagram and TikTok.

Eli said: “I wasn’t even thinking about it, honestly. It was just instinct.

“My main concern was making sure the boy was okay and getting him off the trail so that nobody hit us on the trail.

“The response to the video has been amazing.

“The video went super-viral on TikTok and got a lot of love on other platforms too.

“I think that it is great to spread some positivity since social media can be so negative these days.

“I hope people learn to put other people before themselves.

“I am all about positivity and having a positive mindset all the time because it has changed my life and I think that I can use it to influence others.”