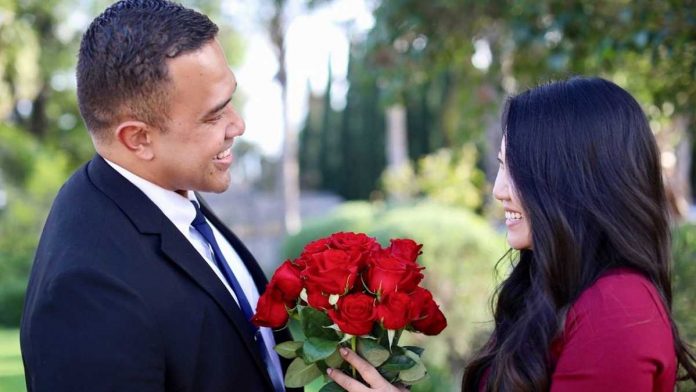 A creative boyfriend came up with a ploy to propose during quarantine – creating a ‘training video’ his unsuspecting girlfriend was asked to watch before surprisingly appearing on screen.

Pila Katoa, 29, and his girlfriend, Tia Wong, 31, had been working from their LA home for the past three weeks, as California ramped up its stay-at-home warnings and social-distancing advice as the coronavirus continued to spread.

During this time, Pila was planning to propose to Tia, but rules at that time meant restaurants were shutting, meetings were cancelled, and gatherings of 10 people or more were prohibited.

And he knew there were two conditions his girlfriend wanted when she was proposed to: for her nails to be done and to be dressed nicely.

As she’d recently had her nails done before lockdown, Pila began thinking of ways he could make sure Tia was dressed for the occasion, and began working with his local bishop, as Tia is president of a local youth group.

The pair set up a fake video presentation, on March 21, where Tia would be required to watch a training video – which, it turned out, Pila had craftily edited.

Dressed in a beautiful red dress for ‘work’, Tia started watching the training video but to her surprise, instead of being met with leadership advice, Pila appeared on screen.

RELATED: Woman Surprised With Proposal As She Enters New Home For First Time

After his introduction she received recorded messages from her family and friends, explaining how happy they were for her and insisting she should “say yes.”

As the video ended Tia was met with a message to “wipe away the tears” and “meet me out back.”

It was there that she discovered Pila in a heart made out of roses, where he got down on one knee and popped the question.

As Tia said ‘Yes’, family watched on from a safe distance, given the current guidelines.

She said: “I was honestly so clueless – I really thought it was for work and I even pull out my notebook and pen at the beginning of the video.

“As soon as he came on screen I was confused and then all I remember is ugly crying for 20 minutes until I walked outside and saw him and my family – then I cried some more.

“We know we are living through unprecedented times and the news can be depressing and scary, but we hope people can see this and for a minute find joy and happiness.

“Everyone has loved the video and I think it brings a smile and some tears to everyone who watches it.”