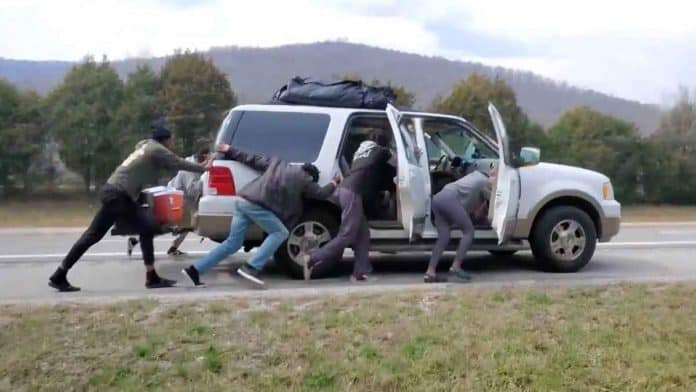 A kind-hearted trucker saved a stranded family by pulling over and towing them to the nearest gas station before paying for their gas and secretly writing ‘Pay It Forward’ on the receipt.

The Amun family had to pull over on the side of the I-24 outside Chattanooga, Tennessee, on March 9 because dad David, 39, had forgotten to fill up the tank.

While they were doing so – and with David’s daughter, Brianna, 20, filming – a long-haul truck suddenly pulled up in front of them.

Out of the truck came a driver who identified himself as Kevin, who asked if they needed a tow before grabbing a chain to attach the Amun vehicle to the back of his.

Kevin towed the family to the nearest gas station, where he helped fill up their tank and even paid for their gas, simply writing ‘Pay It Forward’ on the receipt.

Brianna recorded small snippets of the family’s journey that day, and before Kevin honked his horn and headed off, he asked the Anum’s to text him when they reached their destination.

The family, from Cedar Rapids, Iowa, are now planning to have a meal with Kevin at some point in the summer and thank him again for his kind gesture.

Brianna said: “Right before he left, he handed us the receipt, got in his semi, honked and left.

“We checked the receipt and at the top it said, ‘Pay it Forward.’

“Ten minutes later he sent us a message saying he wanted us to let him know when we got to our destination safely and at that point I was in tears.

“We’re now planning to have dinner with his family this summer.

“Many times people aren’t kind, so when things happen, like my family running out of gas, I don’t expect people to be kind to us.

“But when Kevin came around with that chain, it reminded me that kind people do still exist.

“They deserve recognition because they don’t expect it – that’s why I shared that video.

“Kevin is what good people actually look like, normal-looking people, who help when we can.”