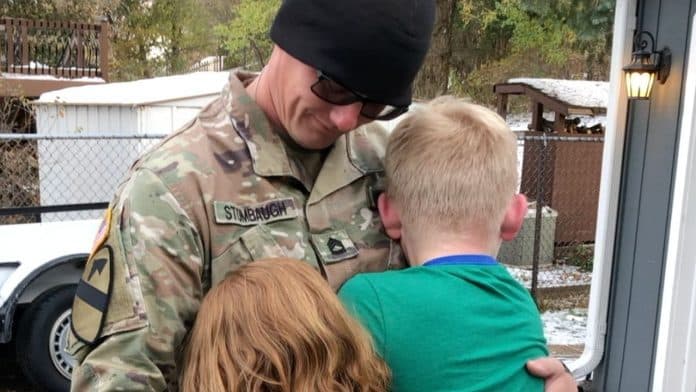 A group of siblings suddenly burst into happy tears when they realized a military duffel bag sitting outside their home could mean only one thing – their dad was home for good following a year-long deployment.

Luke Stombaugh, 35, from Twin Cities, Minnesota, had been based in Iraq for the previous year, his third assignment to the Middle East.

But ahead of his return home, Luke decided not to tell his three children – Noah, 10, Ashlyn, 9, and Lucinda, 5 –  and worked with their mother, Amanda, 35, to arrange a big surprise.

Having landed on October 26, Luke, a member of the Army National Guard for more than 17 years, had Amanda pick him up from the airport, before placing his military-issued duffel bag outside the front door of the family’s home.

As the three kids headed outside, Noah, followed by his younger sisters, approached the bag to inspect it.

Looking at the tags and a padlock, Noah at one point declared, “It’s not Dad,” only for Luke to then appear a few yards away on the family’s driveway.

The three kids all screamed “DAD!” in shock, before running over to their father and crying happy tears in his arms.

Amanda, herself crying behind her cellphone, captured the wholesome moment on video.

In the build-up Luke’s big reveal, Amanda happened to have a surprise in store for her husband, too, asking their neighbors to create banners welcoming him home as they drove back to the house.

Speaking of Noah’s reaction, Luke said: “It kind of broke my heart to see that he had all of those feelings bottled up.

“To see all that emotion pouring out at once was impactful.”

Amanda, whose video of the moment has been viewed more than half a million times, added: “I immediately started crying when I saw our son cry and run to his dad.

“The video has deeply touched everyone who has watched it and many have said they cried.

“They’ve expressed gratitude for Luke’s service and our family’s sacrifice.

“We’re proud of Luke and everything he has done for our country.

“He is a selfless brave leader, both in the military and our family.”