Home Good News Husband Surprises Wife of 63 Years On Birthday After Being Separated By... 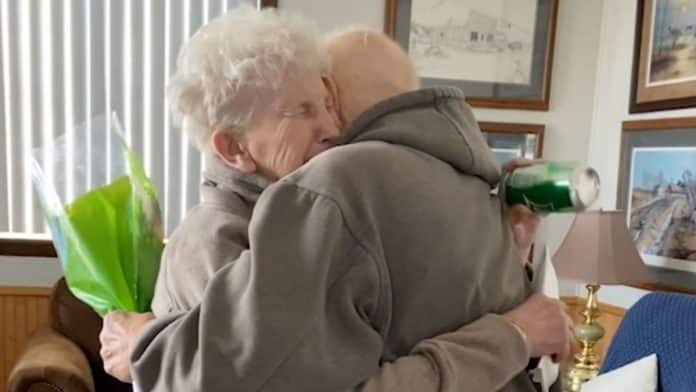 An 84-year-old began balling happy tears when she was surprised by her husband of 63 years on her birthday after the coronavirus pandemic had kept the couple apart.

Jerry and Beverley Lindell, both 84, had hardly spent a moment apart in their 63-years of happy marriage, and even when Jerry was taken to a nursing home for care in February, Beverley would catch the bus every day to visit her loving husband.

But on March 12, COVID-19 put a stop to Beverley’s visits, as new rules meant the couple, from Litchfield, Minnesota, had to remain apart while Jerry was in isolation.

With Jerry remaining at Meeker Manor Nursing Home, Beverley found it very difficult, as the spell quickly became the longest the pair had been apart since marriage.

But on March 26, Beverley’s birthday, Jerry had a surprise in store.

Granted permission to leave the home, where his daughter, Loriee Barnes, works, Jerry decided to surprise his wife on his return home.

In the couple’s living room, Loriee began to film and told her mom she’d brought her some birthday cupcakes – but that wasn’t the only surprise.

As then, with the camera still rolling, in walked Jerry, clutching a bouquet of flowers and heading over to give his wife an emotional hug as they were finally reunited.

RELATED: 87-Year-Old Receives Outpouring Of Love Online When He Brings Binder Of Poems He Writes For Wife To Work To Give Reading To His Coworkers

Loriee said: “I was in tears – mom had just said that Monday it was getting too long and she needed him to come home.

“We’ve had a rough year, but I brought my dad home from the nursing home for my mom’s birthday present – life is so awesome.

“They’re doing good now and taking things a day at a time.”