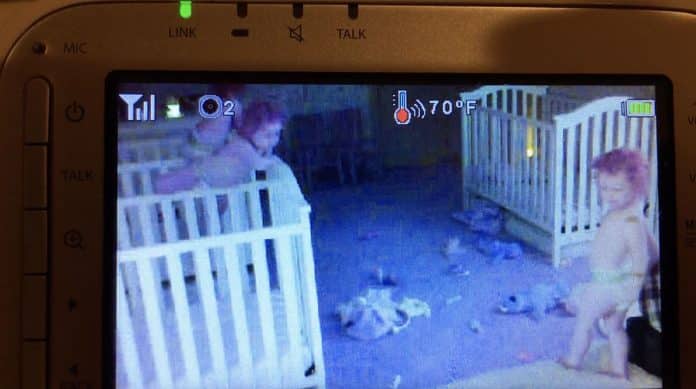 Identical triplets made an audacious break for freedom at the dead of night from their cots – all caught on camera by their parents’ baby monitor.

Dad Chris Suprenant watched in disbelief as he saw his three red-headed and “feisty” daughters co-operating in escaping their cots to play together, while mom Kathryn was away at work.

The clip starts with Kaley in the top right scaling the high side of the cot, before gently lowering herself to the ground.

As her feet touch the floor, the other two girls, Emily and Addy, burst into screams of congratulations.

Making her way over to the other two, Kaley watches on as her twin sisters also begin to copy her and clamber down from the cot.

Watching the incident unfold, dad Chris can be heard counting as the three – all aged 2-years-old – escape one by one before remarking: “We’re in big, big trouble.”

The couple from North Central in Massachusetts, USA, say their adorable girls are constantly mischievous.

Mom Kathryn said: “We knew that the girls would soon learn how to escape their cribs, what we didn’t know is that they would learn at the same time!

“Their antics can only be described as ‘Escape from Alcatraz’ like.

“My husband Chris summed it up best when he said we were in big, big trouble!”