Home Good News Grandma Who Used To Be Missionary In Peru Surprised With Alpaca On... 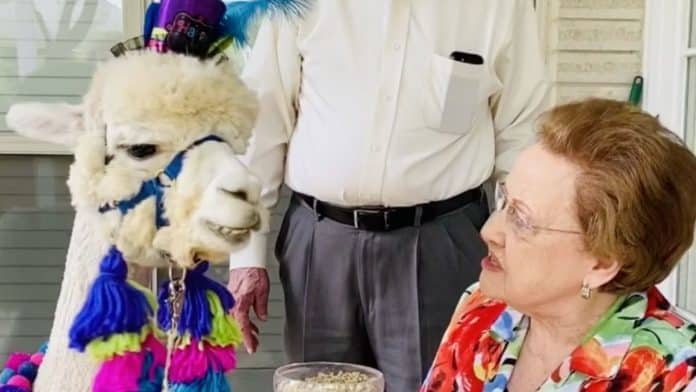 A former missionary who spent years in Peru was surprised with a real-life alpaca on her 89th birthday – the first time she had seen one in more than five decades.

Jo Lee, from San Antonio, Texas, couldn’t believe her eyes as Waylon the alpaca was brought from around the side of her home to greet her.

Jo lived in Peru from 1961 until 1969 with her husband, Lewis Lee, 90, after they had been appointed by the Foreign Mission Board to serve abroad.

But back in her native Texas, Jo’s granddaughters – Krista Friedman, 34, and Sharon Champman, 29 – would joke with her about how much they all loved the llamas and alpacas native to Peru.

Jo, having lived around them, would receive themed birthday cards and socks from her family – but for more than five decades had never seen one in person since she left South America.

With the coronavirus stifling birthday plans across the country and the elderly being encouraged to social distance for their safety, Krista and Sharon saw an opportunity.

Having reached out to Texas Party Animals, a company that rents time with alpacas and llamas for the likes of birthdays and weddings, the sisters were able to plan the surprise for April 6.

RELATED: Girl Whose Birthday Wish Was For Military Dad To Return From Middle East Deployment Turns Around To Find Him Standing Next To her

After the initial shock, Jo was able to feed Waylon, walk him around the garden, and share photos with the animal with all her family.

The story did not come to light until recently, when Loretta Hajovsky, the owner of Texas Party Animals, shared Krista’s video of the surprise on the company’s social media accounts.

Krista said: “It takes a lot to catch our grandparents off guard, so when we saw her face light up as we came around the corner, we knew she was genuinely surprised and excited.

“The response to the video has been heartwarming beyond belief.

“There’s always a way to show others you love and care for them despite age and despite a pandemic.

“Our grandparents are the light of our family’s life – unwaveringly, they’ve raised many of us at any given point in time, cared for us and loved each and every person in our family for the individual they are and have become.

“Outside of returning that same love, doing these types of things for and with them, and continuing to create memories like this have taken the place of any material gift we could ever give.”