Home Good News Girl’s Godfather Goes Above And Beyond For Father-Daughter Dance By Dressing As... 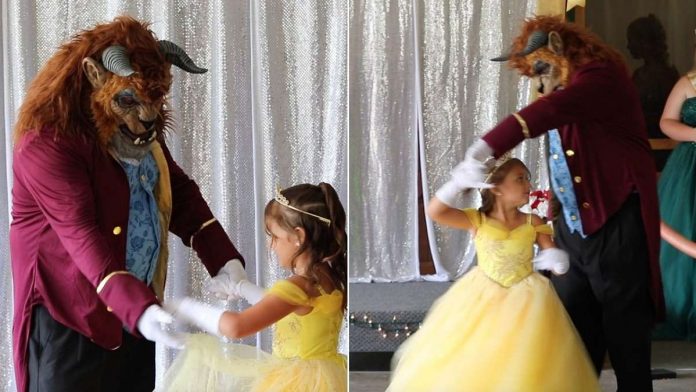 A loving godfather went above and beyond to make sure this seven-year-old crushed her father-daughter dance performance – by dressing up as Disney’s Beast.

Alberto Ayala is the legal guardian of Hazel Barnett, 7, who had wanted to enter a pageant at her local campground.

Hazel had been a competitor at the event for the previous four years, which includes a “talent” section.

An enthusiastic Hazel, who loves Disney, was hoping to perform the dance between Belle and Beast, and so she asked Alberto, 54, if he could help.

Since Alberto became Hazel’s legal guardian, the seven-year-old has seen him as the father figure in her life, her family said.

And on the day of the performance, Alberto decided to go one step further than everyday dads in daddy-daughter competitions.

With Hazell dressed in her Belle outfit, Alberto donned a complete costume of Beast, including a giant head of the Disney character.

After the pair performed the two-minute dance, the crowd gave a huge standing ovation.

Hazel went on to win the event, on August 7, which was captured on film by Alberto’s wife, Keri, 55, from Chicago, Illinois.

Speaking of the moment, Hazel’s relative Erin, who was also in the audience, said: “The moment was very heartwarming and beautiful.

“Everyone loved and enjoyed it and a few people had tears in their eyes during the dance.

“There was nothing but love and positivity.

“The message we like everyone to take away from this is to teach your children that they deserve nothing but the best and unconditional love.”