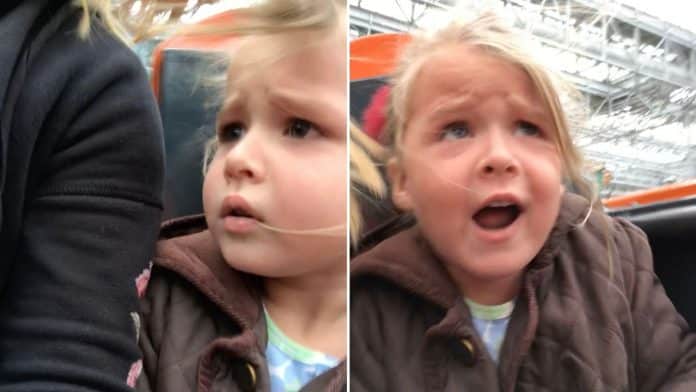 This is the moment a four-year-old instantly regrets her decision to go on a “big ride” rollercoaster.

Little Lyla had bravely agreed to ride the coaster called Orange Streak at Mall of America in Bloomington, Minnesota.

But her initial smile almost instantly gives way to a grimace as the regret at her decision becomes apparent when the rollercoaster takes its first big dip.

As she squirms with horror at the speed the coaster is travelling, her mom Kara Leavell is in stitches of laughter next to her.

Filming on her cell phone, Kara tries to comfort her daughter.

But just as Lyla asks if it is over, the coaster begins another climb to the summit where it will plunge to the bottom.

At the top with the dip appearing, Lyla exclaims: “Oh my god this is horrible!”

Mom Kara, from New Smyrna Beach, Florida, said: I was crying tears of laughter the entire time on the ride because her reaction was priceless.

Kara says that Lyla took some persuading to go on the ride, with the family using the remainder of their tokens at the end of the day.

She added: “After a minute or so of convincing her that it would be safe and fun, she bravely agreed.

“We wanted to seek some thrills and memories to last a lifetime, so I recorded it on my phone, but didn’t expect her reaction at all.

“Everyone who has watched the video has found it hilarious and adorable.”