Home Good News Girl Whose Birthday Wish Was For Military Dad To Return From Middle... 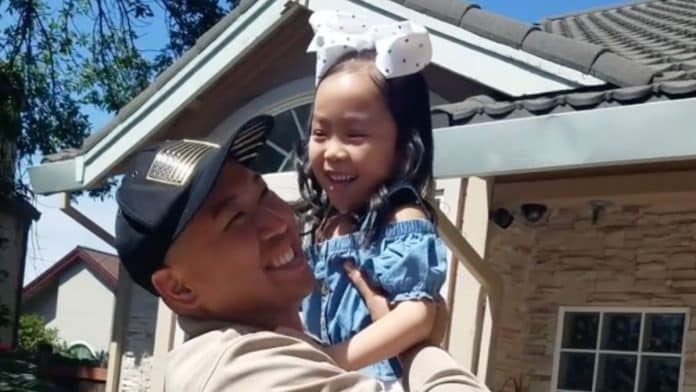 A five-year-old girl made a birthday wish for her military father to return home from the Middle East – only to turn around and discover him standing right next to her.

Adorable Aubrey Summer let out a loud “DADDY!” as soon as she saw her big surprise, but only after her family had decided to play a small prank on her first.

After five months in the Middle East, her father, Eric Miguel, 36, from Roseville, California, had returned to his base in Fort Bragg, North Carolina, where he was then had to quarantine.

Having gotten the all clear, Eric filed for a few days leave from the Army’s 82nd Airborne Division, during which time he returned to California to surprise his daughter.

It was coming up to Aubrey Summer’s fifth birthday, and so her mom Janice, 36, asked what she would like as a gift.

Aubrey Summer said she would like her dad to return from deployment, and so, on May 25, family members collected Eric from the airport and he hid around the side of his family’s home.

As his daughter opened the front door, she was met with a large wrapped box, which she hoped would mean her dream had come true.

But as Aubrey Summer tore off the wrapping paper and opened the box, she was met with nothing but a small box of vitamins and empty space.

Having seen her disappointment, family members then asked Aubrey Summer to turn around and make a wish, during which time Eric snuck up behind her.

As she spun around again, Aubrey Summer let out her excitable yell, with Eric picking her up and wiping away his tears of joy.

Eric – whose father served in the Navy and brother serves in the Air Force – then got to spend a few precious days at home with his family.

He said: “Her reaction was priceless – she was so happy to see me and that I made it on her birthday.

“It felt great and was the best feeling ever.

RELATED: Military Dad Surprises Kids Who Thought He Was Still In Afghanistan By Hiding Behind ‘Welcome’ Banner

“I started tearing up when I saw her, and her reaction was beyond happy and grateful that we were finally reunited.

“I got excited whenever I was deployed overseas before, but it really feels different now that I have my own family; it feels like I don’t want to leave them, but I have to.

“Especially my daughter, as she is a daddy’s girl and she is not used to me not being around.

“This was our first time being away that long and on very short notice – she was not really prepared for it.

“After surprising her, she was staring at me while I was eating as if it was just a dream for her. “She got more attached to me and never let go.”