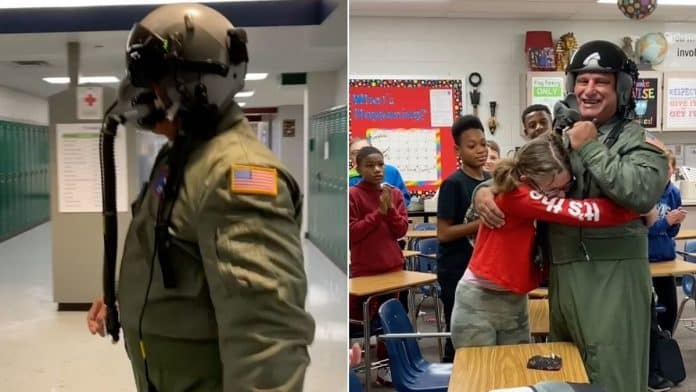 A girl with autism and mild Asperger’s Syndrome immediately dived into her stepdad’s arms when he came to surprise her in school in full military gear.

Lanie Cochran-Vas, 12, thought stepdad Craig Woodin wouldn’t be able to make it to the guest speaker’s event at Summit Lake’s Middle School in Missouri – but Craig had other plans.

Captured on video, Craig, 51, arrived at the school on Veteran’s Day, dressed from head to toe in his fighter pilot uniform, including his helmet from his days in the Air Force.

In 2015, Craig retired had as a Master Sergeant after 28 years in the Air Force and National Guard, which resulted in nine deployments.

–Scroll down to see video below-

But when his boss found out about Craig’s desire to speak at the event, he was allowed time to head to Lanie’s big surprise.

Entering her classroom, Craig went up to his stepdaughter’s desk and stood right in front of her.

Then, to Lanie’s surprise, the veteran removed his helmet to reveal his true identity, causing a delighted Lanie to dive into his arms.

She said: “Craig and I were so excited to do this for her, we both had trouble sleeping the night before.

“Walking to her classroom, I was incredibly excited for them both.

“Watching her emotions transform from confusion, to disbelief, then finally reality setting in was absolutely amazing – I felt a sense of pride which brought tears to my eyes.

“Lanie is his step-daughter, and Craig didn’t have to do this.

“But those two, they have this bond that transcends genetics.”