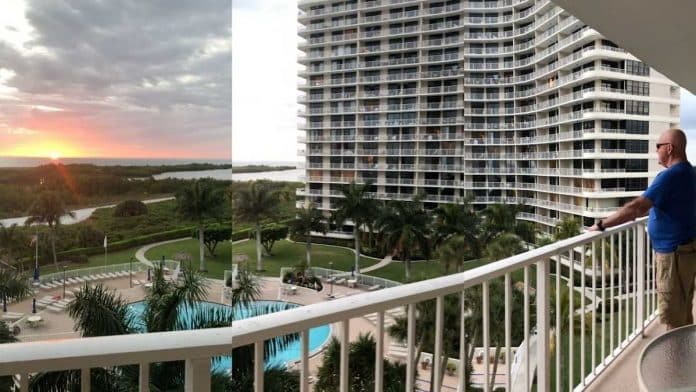 A group of apartment buildings burst into rapturous applause as a man in isolation sings a rousing rendition of “God Bless America” in front of a spectacular sunset.

On lockdown because of the COVID-19 pandemic, Thomas Blaney, 72, stood on the balcony of his sixth-floor Marco Island, Florida, condo on April 3 and began to sing at the top of his lungs.

When he finished the song, the adjacent buildings began whooping and cheering, sharing in Tom’s positivity and thanking him for his resonant performance.

The moment was captured on video by Tom’s partner, Lynn Schweinshaut, who said Tom took it upon himself to perform the song as a sign of hope during a time of despair.

The couple reside in Harwich Port, Massachusetts, but have been staying at the apartment since March 14, before the state issued its stay-at-home order.

Lynn said Tom, a retired teacher of 35 years, has been performing every night, and plans to continue doing so until their tentative departure date of April 25.

According to the family, Tom first sang the song from the balcony during a vacation a few years ago – though he has only started doing this daily during the coronavirus pandemic.

Lynn said: “The response from our complex has been positively and completely overwhelming.

“Although we are all practicing social distancing and isolation, this gives us all an opportunity from each balcony to join one another and stand proud of our country.

“Many people have seen the video on social media and the response has been awesome – during this difficult time we are not in it alone.”