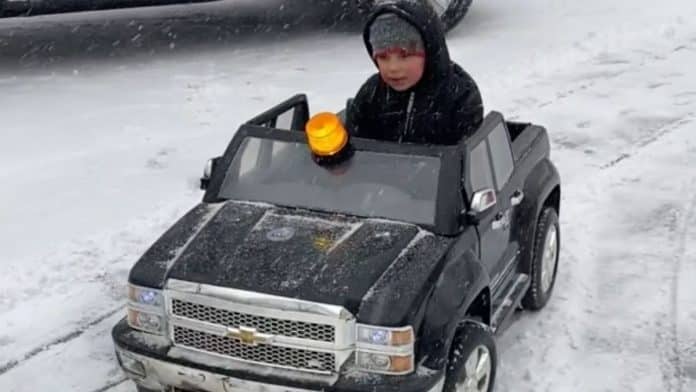 A kind-hearted five-year-old shot to viral fame after his dad modified his drivable toy truck to help plow their driveway.

In the adorable video, viewed more than 20 million times, Parker Esposito zooms along in his battery-operated Chevrolet truck, which he had added a plow to in order to collect snow.

Dad Joe Esposito, 36, said Parker and brother Brady, aged three, are always driving their electric vehicles so when snow fell near their home in Sandy Hook, Connecticut, the boys couldn’t wait to offer a helping hand.

Joe created the custom plow for Parker, which he then strapped to the front, before allowing his son to take off.

Joe said: “This has been such an exciting time to see the joy on our five-year-old’s face and to see pure joy in how much people love the video and his reaction.

RELATED: Boy Drives Himself Into Major Surgery Thanks To The Electric Car

“Parker loves to work and is a born helper – he said he wanted to create a plow to clear the driveway any time it snows so I thought I’d give it a try.

“He truly takes it seriously and finds purpose and enjoyment in it.

“This moment is a good reminder that no matter what’s happening in the world, the ability to bring happiness can actually be very simple.

“Adding a plow to his favorite car and allowing him to help his father with something brought Parker so much joy.”