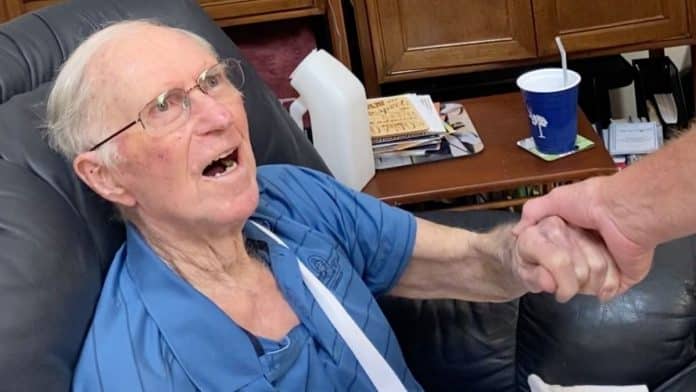 A father was left completely speechless on his 90th birthday, as his estranged son who he had not seen for more than 25 years turned up to surprise him.

Robert Thompson, 90, and his son Tom, 63, had not seen each other for more than a quarter of a century, following a falling out back in the 90s.

For more than two decades the pair had no contact, but with a milestone birthday coming up and Robert’s health in decline, his daughter Scarlet Charlwood and other son, also called Robert, decided to see if they could patch up old wounds.

The pair reached out to Tom, and initially he planned to surprise his father during Scarlet’s wedding in April – only for the coronavirus pandemic to put most of America on hold.

With Scarlet and the younger Robert gathered in their father’s home, in Fredericksburg, Virginia, in walked Tom, who had travelled from San Diego, California, with his family.

RELATED: Brothers Sob As They Are Reunited With Parents After 23 Years Apart

Scarlet captured the moment on video, with Tom heading to his father to introduce himself.

Robert let out a, “Tom!”, in complete shock, sitting speechless in his chair as Tom introduced his father to his wife and kids, who Robert had never met.

Scarlet later shared the video on TikTok, with a number of viewers leaving positive comments about how it had inspired them.

Scarlet said: “It warmed my heart to see the pure joy and relief in my dad’s smile.

“I know that it has been his hope all of his life to reconnect with his other children.

“Each time I watch the video, I feel overwhelmingly grateful that I was able to be there for that beautiful moment that my dad has always dreamed about.

“I hope this video inspires others to reconnect with family members, no matter how long they have been apart.”