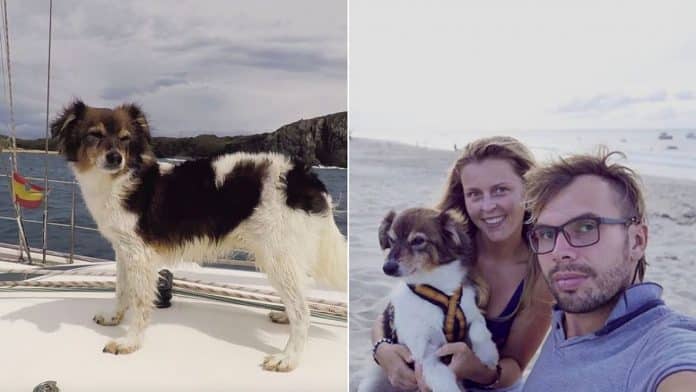 An adorable dog is hitch-hiking around the globe with his owners, visiting 36 countries and counting.

Snupi, a 12-year-old Mongrel, has visited three continents during the epic journey with owners Izabella and Piotr Miklaszewski.

Together the trio are hitch-hiking across the globe – including oceans – even arranging a ride on a boat that travelled 3,000 nautical miles across the Atlantic from Morocco to Brazil.

During their journey, Izabella, Piotr and Snupi have conquered the highest mountain in North Africa – Jabal Toubkal in Morocco – scaled volcanoes in Ecuador and sailed around the Caribbean.

They are currently in Guatemala, the last country on their meandering journey through South America.

Piotr, who along with his partner Izabella adopted Snupi nine years ago, explained how their adventure began: “We were inspired to travel by Snupi.

“Before Snupi showed up, walks and elements of an active lifestyle were already present in our lives.

“However, with the dog, our walks started getting longer, and taking us farther from home.

Eventually we got into a headspace where a day without at least one long walk felt somehow incomplete, like a “hard” day.

“Thanks to Snupi we started spending more time out in the fresh air and among nature.

“Getting bored with already explored territory, we started to think about bigger travels.

“We traveled first by train, and later with a friend’s car. During this time we met a guy who had hitchhiked from Poland to India.

“That’s when we decided that hitchhiking was the best option for traveling with a dog. Three weeks later we were on our first hitchhiking trip.

“Within a month and a half we had traveled 12,000 km, visiting Turkey, Armenia, Georgia and coming all the way back.”

After that first inspiring trip, they set about planning their next adventure – this time a truly global one.

But travelling with a pet in tow can pose its own problems, as Piotr explained: “Before we set off we gave him a haircut, because short hair makes it so much easier to stay clean in the rain, mud and dirt.

“We also switched is collar for a harness and fixed all his formal documentation and vaccines.

“The hardest part is carrying all his food in the backpack.”

Despite the challenges of travelling with Snupi, which includes avoiding big, overcrowded cities, Piotr says the pros far outweigh the cons.

He added: “A dog is always happy and ready for action.

“When we have bad travel days, get scared, tired, sad, or lack motivation, one look at Snupi’s happy face is enough to get some positive energy back.

“We realized that all problems are only temporary, and that the most important thing is that we have each other.

“There is nothing that we can’t overcome.

“What’s more actually is that he makes us safer, because thieves are less likely to attack someone with a dog, even though he looks super cute.

“A dog helps us blend in as locals, because no one expects tourists to have a dog.

“A dog is also a great bridge in interpersonal relationships.

“When people see us, a lot of normal language, cultural, and shyness barriers break down.

“There’s also a social component to it – people without a lot of money approach us to talk about the dog, just as people who look like they’re millionaires do.”

Now they have conquered Europe and South America, they intend to continue the trip north through Mexico, America, Canada and across the Bering Strait to North Eastern Russia and on to China, opening up the rest of Asia.