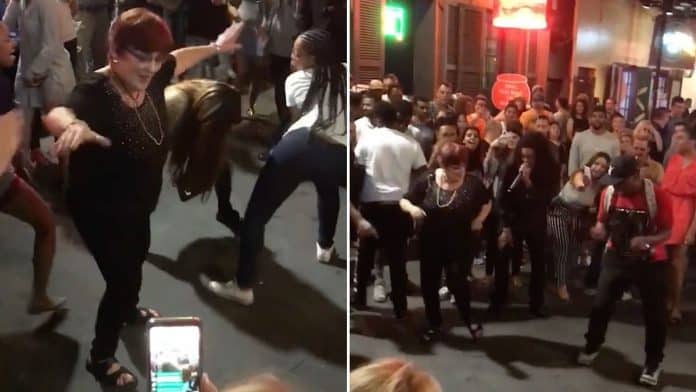 A dancing grandma has been filmed taking on youngsters in a dance-off in New Orleans famous Bourbon Street.

The hilarious video was shot by passerby Matthew Libassi, from New York, during a weekend away in the southern city.

While waling down Bourbon Street – famous for its raucous party atmosphere – he noticed a group begin to gather.

All of a sudden an impromptu dance circle sparked into life, including ‘dancing grandma’ known only as LeAnne from California.

Dishing out some of her best dance moves, the crow whoops and hollers in appreciation as she takes on the youngsters.

Even managing to twerk, LeAnne wowed the crowd of onlookers.

Matthew said: “It only appeared to take a few words of encouragement and LeAnne jumped in and dominated the dance party.”