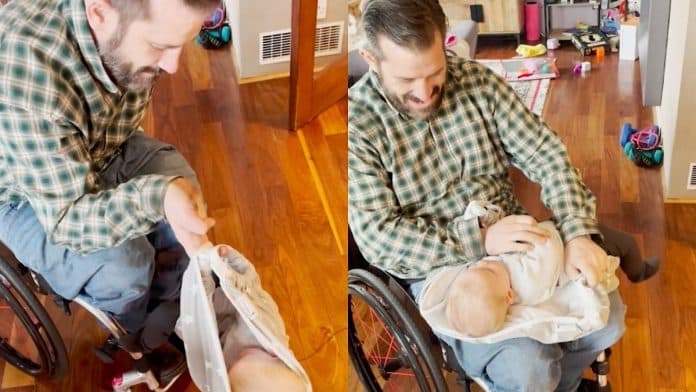 A dad with quadriplegia has gone viral after a video of him lifting his giggling baby daughter under his own strength for the first time received millions of views.

Due to his condition, 44-year-old Struan Kerr-Liddell was worried that he might not be able to bond with his daughter, Isla, in the same way as other fathers.

Struan was injured in 1999, playing rugby in Edinburgh, Scotland.

He dislocated his neck at his c5/c6 vertebrae, causing his quadriplegia.

Struan then met his now-wife, Nicole, 30, 18 years later, when Nicole was studying at the University of Edinburgh.

When Isla was born, Struan initially struggled, Nicole said, as he could not help out with diaper changing, bathing, and feeding.

Over time the couple found new ways for dad and daughter to bond, and on May 2, when Isla was around six months old, Struan decided to try and pick his daughter up.

The couple didn’t really know what to expect, Nicole admitted, but using a Snugglbundl carrier, Struan was able to initially lift his daughter a few inches off the ground under his own strength.

As Isla giggled, this encouraged her dad to take things a little further, and eventually, Struan was able to lift his daughter onto his lap.

Nicole later shared a video of the moment online, which received more than three million views.

Nicole, who is originally from Williamstown, New Jersey, said: “She was finding it so funny when he tried to start getting her into the carrier, I just had to start filming.

“Neither of us really thought he would be able to do it, and I was ready to step in, but it obviously turned out okay.

“It made my heart soar, to see them interacting like that – you can see in the video how excited she is, and she had no fear as her dad dangled her off the floor.

“A lot of the times when Struan is trying to do something, it takes longer and isn’t the prettiest, but I’m always so proud when he actually does it.

“He works full time, has done 3 marathons on a handcycle, and to now see him become such an awesome father is amazing.

“I guess what we’d like others to take away from us sharing these videos is that no matter what life deals you, you can find ways to overcome and find joy in everyday life.”