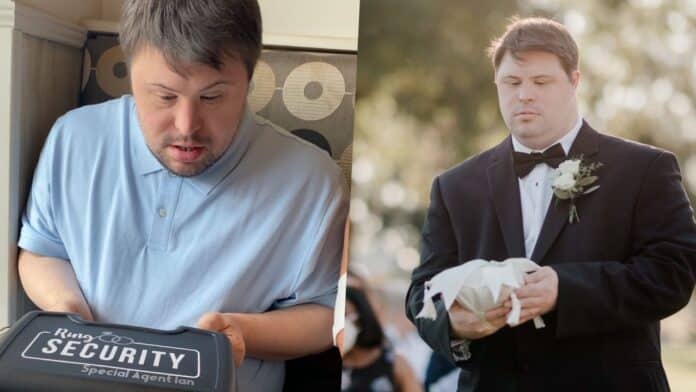 A bride and her friend with Down syndrome have warmed hearts after she assigned him to be the “ring security” at her wedding.

Chelsea Barton Kelly said that she and husband Hayden knew her friend Ian Terry would be perfect for the task, and so they planned a surprise to ask him to do them the honor.

After Chelsea, 32, from Tuscaloosa, Alabama, had received a firm “Yes” from Ian, 35, they headed off to get him fitted for a suit to go with his specially-made t-shirt, outlining is ring-bearing duties.

Ian and Chelsea have known each other for five years, having met a World Down Syndrome Day celebration, at RISE Center, in Tuscaloosa.

Since that moment, the two have remained close, and each year on March 21 (3/21), they celebrate how unique the triplication of the 21st chromosome is, which causes Down syndrome.

On Chelsea and Hayden’s wedding day, on September 25, 2021, the couple said they were filled with emotion about how much pride Ian took in his duties.

READ MORE LIKE THIS: Emotional moment man with Down Syndrome reads card aloud to realize he is going to be a Groomsman at Sister’s wedding

He was so attentive all day long, Chelsea said, and Ian, known as “King Ian,” rightly stole the show.

A few months later, Chelsea reposted her video surprising Ian with the ring security request to celebrate World Down Syndrome Day in 2022.

She said: “There was never even a second of worry with Ian on our wedding day.

“He takes extreme pride in everything that he does. This was no exception.

“Hayden and I both beamed with pride seeing him so excited the day of.

“In the video, you can hear him say, ‘It would be my honor,’ once we popped the question.

“In reality, it’s our honor to have him as part of our lives and we were especially proud to have him play such a crucial role in our special day.

“I hope our story adds to the conversation that people with special needs are people first, and their differences don’t define them.

“Ian and I are much more alike than we are different.

“My wish would be that everyone who sees our story, understands that people with special needs are capable, deserving, and life-enriching.”